Update Required To play the media you will need to either update your browser to a recent version or update your Flash plugin.
By Faith Pirlo
13 November 2022


Archeologists have discovered more than twenty bronze statues from ancient Roman times in Tuscany, Italy over the past few weeks. They said the statues were well protected in thermal baths and are calling the discovery "exceptional."

The statues were found in the town of San Casciano dei Bagni, about 160 kilometers north of Rome. It is a place where archaeologists have explored the ancient ruins of a bathhouse for the past three years.

Jacopo Tabolli is a professor at the University for Foreigners in Siena, Italy. He is the lead archaeologist on the project. He told Reuters on Tuesday, "It is a very significant, exceptional finding." 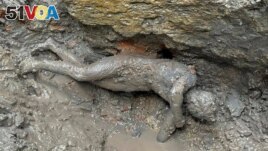 A newly discovered 2,300-year-old bronze statue lies on the ground in San Casciano dei Bagni, Italy, in this handout photo obtained by Reuters on November 8, 2022. (Ministero della Cultura/Handout via REUTERS)

Tabolli said the statues represent Greco-Roman religious figures like Apollo, the god of the sun. He explained that they were used to honor a holy place before they were put into the thermal baths as part of a ceremony during the height of the Roman Empire, "probably around the 1st century AD." Tabolli said about the ceremony, "You give to the water because you hope that the water gives something back to you."

The hot waters of San Casciano helped to protect the statues, which Tabolli said were, "almost like as on the day they were immersed."

There were 24 large statues and several smaller ones. And they were also covered with nearly 6,000 bronze, silver, and gold coins.

Tabolli said that the use of bronze for the statues was unusual. At that time, statues were normally made from terracotta or red clay from the earth. This suggests that the bronze statues were made by a high-level group of people.

Italy's Culture Ministry said the statues come from the 2nd century BC and the 1st century AD. That period was a time of great change in Tuscany as government rule moved from Etruscan to Roman.

Many conflicts and cultural exchanges happened during this time. The bathhouse of San Casciano was a safe place for those escaping unrest and war to share culture and language, the ministry said.

Gennaro Sangiuliano is Italy's Culture Minister. He welcomed the finding and said that it would help with tourism. "This is an exceptional discovery which confirms once again that Italy is a country of immense and unique treasures," Sangiuliano said in a statement.

ANSA, the Italian news agency reported that the statues will be cleaned and repaired before returning to San Casciano dei Bagi for a new museum.

immerse – v. to plunge or dip into liquid

tourism – n. the practice of traveling for recreation

museum – n. a building in which interesting and valuable things (as works of art or historical or scientific objects) are collected and shown to the public