Before-and-After Photos From Earthquake in Italy

Update Required To play the media you will need to either update your browser to a recent version or update your Flash plugin.
By Dan Friedell
25 August, 2016

A magnitude 6.2 earthquake struck central Italy on Wednesday. The U.S. Geological Survey says the center of the earthquake was near the town of Norcia. 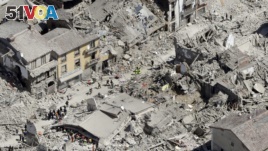 The mayor of Amatrice said "three-quarters of the town is not there anymore."

Hundreds of people died and more were injured in the quake.

One woman in Amatrice said "it was one of the most beautiful towns of Italy, and now there's nothing left."

Many people and news organizations posted photos on Facebook and Twitter comparing how the towns looked before and after the earthquake.

CNN used a computer animation called a GIF to show how Amatrice changed from one day to the next. The town's clock tower was the only building still standing.

USA Today used both aerial photos and photos from the ground to make a slideshow of before and after images. Some of the images came from Google Maps' street view.

One person wrote: "my heart goes out to the people."

Rescue efforts are continuing in Italy. Many were excited to hear the news of a 10-year-old girl being pulled from the rubble after 17 hours.

Reacting to the news on Facebook, Randy Bettis wondered if "Mother Nature could give us a little break," after the earthquake in Italy and floods in the U.S. state of Louisiana.

What do you think the images coming from Italy? We want to hear from you. Write to us in the Comments Section or on 51VOA.COM.

animation – n. a way of making a movie by using a series of drawings, computer graphics, or photographs of objects (such as puppets or models) that are slightly different from one another and that when viewed quickly one after another create the appearance of movement

aerial – adj. taken or seen from an airplane