Update Required To play the media you will need to either update your browser to a recent version or update your Flash plugin.
By Christopher Jones-Cruise
29 April, 2016


Italy says an international force aimed at limiting the number of people sailing from Libya to Europe could be ready by July.

Some observers are worried that the number of people arriving in Europe could jump because travel by land through Greece and the Balkans remains blocked.

Most of the new arrivals are migrants. They have fled their home country and chosen to go overseas, usually for economic reasons. 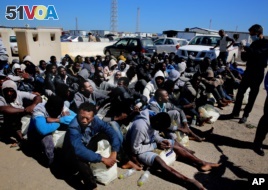 African illegal migrants wait to receive medical help after being rescued by coast guards, in Tripoli, Libya, April 11, 2016. More than 100 migrants were rescued by two coast guard units on Monday after their boat started sinking in the sea. (AP Photo/Mohamed Ben Khalifa)

Libyan security forces raided a home in the city of Tripoli last week. They detained more than 200 migrants from across Africa. They also captured a suspected smuggler.

More than 16,000 people sailed from North Africa to Italy in the first three months of 2016. That is almost two times as many as the number who traveled across the Mediterranean during the same period in 2015.

The United States has offered to support a proposed naval operation off the coast of Libya. The international force would be under the command of NATO (the North Atlantic Treaty Organization).

But it is not known what the ships would do if they find migrants in boats sailing for Europe.

Riccardo Fabiani is a policy expert at the Eurasia Group. He said some observers say the migrants will be returned to their home countries in Africa. But he said it is clear that the African governments do not support that plan. And he said that returning them to Libya is not under consideration because the Libyan government does not have the ability to care for them.

Western nations hope to increase Libya's ability to feed and house the refugees by supporting a new unity government in the country. It is known as the Government of National Accord. Its goal is to persuade competing groups from the eastern and western parts of the country to work together.

"I do not think it would be welcomed by this new government. It would send the wrong signal. This is a matter that Libyans (must) come together on," he said.

Henry Ridgwell in London wrote this story for VOANews. Christopher Jones-Cruise adapted it for Learning English. George Grow was the editor.

smuggler – n. a criminal who moves (someone or something) from one country into another illegally and secretly

stalemate – n. a contest, dispute, competition, etc., in which neither side can gain an advantage or win