Ivory Coast Battles to Save Forests Destroyed by Cocoa Farming

Update Required To play the media you will need to either update your browser to a recent version or update your Flash plugin.
By Gregory Stachel
21 November 2021


The Ivory Coast is the world's top cocoa-growing country. Cocoa grows as seeds on a tropical tree called the cacao. Cocoa is the main element used in making chocolate.

The Ivorian government is punishing cocoa growers, however, after years of intensive and often illegal farming. Such farming methods have destroyed the country's tropical forests.

In January of 2020, one cocoa-growing settlement was largely destroyed last year by Ivorian forest agents. Farmers went through the remains of their village to recover the cocoa.

"They set the whole village on fire," said Alexis Kouassi Akpoue. He was describing the day when the agents when through the settlement in Rapides Grah, a protected forest. He and thousands of other farmers had planted cocoa there illegally. "The next morning at 5 o'clock they sent in the bulldozers," he added.

Reporters with the Reuters news agency visited the village a year later. Business, they said, was back and doing well. Farmers dried and bagged cocoa beans among the ruined buildings. Buyers searched for quality cocoa. Most of it would later be used in chocolate and other sweets made in Europe. 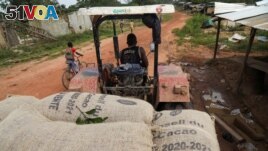 A truck transports bags of cocoa in the Ivorian cocoa farming village of Djigbadji, commonly known as Bandikro or Bandit Town, located inside the Rapides Grah protected forest on January 7, 2021. (REUTERS/Luc Gnago)

Leading chocolate and cocoa companies are examining their own supply chain for illegally grown cocoa. European Union officials say the Ivorian government's efforts to protect the forests are not enough.

The European Commission proposed legislation on November 17 to deal with the issue. The legislation would push companies to find and fix environmental and human rights risks in their international supply chains -- or face punishment.

Companies would be restricted from sourcing cocoa grown on land deforested after a given date. The exact date would be set by the law.

EU Parliament member Delara Burkhardt said voluntary efforts by companies to stop deforestation "have largely failed." The legislation is expected to pass in some form as soon as 2023.

Chocolate and cocoa companies say they support the new laws but do not agree that their own efforts have failed. They told Reuters they are sure that the cocoa they use does not come from the Rapides Grah forest or other illegal farming operations.

The industry's leading cocoa approval committee has said that thousands of farms in protected areas received approval when they should not have.

In addition, purchasing documents as well as talks with farmers suggest that some of the chocolate industry's biggest companies do receive at least some of their cocoa from protected forests. These companies include Nestle, Mars Inc, Cargill Inc, and Touton S.A.

Reuters did not follow individual shipments of illegally farmed cocoa to the companies. Cargill, Mars, and Nestle have said they have not bought illegally grown cocoa. Touton did not answer Reuters' requests for comment.

It is extremely difficult to follow where cocoa has come from. This is in part because groups of farmers buy from growers who are not members of their approved group. Ivory Coast's Ministry of Water and Forests estimates 20 to 30 percent of the 2 million metric tons of cocoa produced each year is grown illegally. It believes that almost all illegally grown cocoa enters the international supply chain.

"We want that to stop," said Water and Forests Minister Alain-Richard Donwahi.

The Ivorian government says it blames locals for the problem. But it notes that international companies continue to make money from deforestation. And those companies have a responsibility to help forests recover.

bulldozer – n. a powerful and heavy vehicle that has a large curved piece of metal at its front and that is used for moving dirt and rocks and pushing over trees and other structures

bag – v. to put (something) into a container made of thin material (such as paper, plastic, or cloth) that opens at the top and is used for holding or carrying things

bean – n. a seed that looks like a bean but that does not come from a climbing plant

chocolate – n. a food that is made from cacao beans and that is eaten as candy or used as a flavoring ingredient in other sweet foods

supply chain – n. everything used in the process to make, sell, and transport goods to buyers