Update Required To play the media you will need to either update your browser to a recent version or update your Flash plugin.
By Dan Friedell
21 September 2021


The drug company Johnson & Johnson, known as J&J, said Tuesday that its own studies show a second shot of its COVID-19 vaccine greatly increases protection.

The World Health Organization approved J&J's Janssen vaccine based on only one shot. But the drug company says a second dose, delivered either two or six months after the first, offers longer and greater protection. 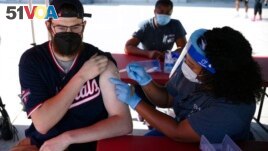 Chandler Millard, left, of Alexandria, Va., receives a Johnson & Johnson vaccine at a COVID-19 vaccination clinic hosted by the Washington Nationals outside of Nationals Park before a baseball game against the Colorado Rockies, Sept. 18, 2021. (AP Photo/Nick Wass)

The findings have not yet been examined by independent scientists.

The company said the single dose is 70 percent effective for up to eight months. A second dose, however, results in 94 percent protection against moderate to severe forms of the virus.

The J&J study included 30,000 people who received a second dose 56 days after their first one. J&J said people dealt with the second dose well and felt side effects similar to the first dose. The vaccine was found to be less effective over time for people over the age of 60, but still prevented hospitalization 78 percent of the time.

J&J noted that during part of their study -- from March through late July -- the Delta variant of COVID-19 was present in the U.S.

Last week, the FDA recommended emergency use of a third shot for people over 65 who received the two-dose Pfizer-BioNTech vaccine. So far, Pfizer is the only company to send enough data to the FDA for a decision on additional shots.

Dan Friedell adapted this story for Learning English based on reports by Reuters and The Associated Press. Ashley Thompson was the editor.

Did you get the Johnson & Johnson vaccine? What do you think about this news? Tell us in the Comments Section and visit 51VOA.COM.

shot –n. an act of putting something (such as medicine or vaccine) into the body with a needle

dose –n. the amount of a medicine, drug, or vitamin that is taken at one time

variant –n. something that is different in some way from others of the same kind