Update Required To play the media you will need to either update your browser to a recent version or update your Flash plugin.
By VOA
20 August, 2014


President Barack Obama has condemned the Islamic State militants who killed an American reporter and threatened to kill another one.

The militants executed James Foley and recorded the act on video. They released the video on the Internet Tuesday. On Wednesday, Mr. Obama said, "the whole world is appalled by the brutal murder of James Foley." He said the United States will continue to do what it must to protect its people. 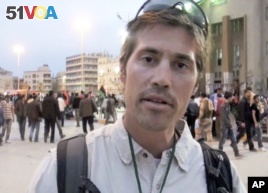 James Foley was 40 years old. He disappeared on November 22, 2012, after gunmen kidnapped him in Syria. He had reported in the Middle East for five years, for organizations including the GlobalPost.

Joel Sotloff has been missing since August 2013. He reported for Time magazine and the Christian Science Monitor.

Peaceful protests took place Tuesday night in Ferguson, Missouri. Demonstrators were protesting the shooting death of an unarmed black teenager by a white police officer on August ninth. Many of the almost nightly protests have turned violent.

U.S. Attorney General Eric Holder arrived in Ferguson on Wednesday to meet with community leaders, local officials and FBI investigators. Mr. Holder is to discuss the federal civil rights investigation of the shooting.

Police in Liberia's capital, Monrovia, fired tear gas Wednesday during demonstrations about efforts to contain the Ebola virus. Protesters were angry about restrictions on movement in their neighborhood. Protesters in the West Point neighborhood shouted and threw stones at security forces. The Liberian government had ordered the restrictions to help stop the spread of Ebola. The World Health Organization has reported over 90 Ebola deaths around Monrovia.

Pakistan's parliament met Wednesday as thousands of protesters gathered outside. They demanded the resignation of Prime Minister Nawaz Sharif.

Former cricket star Imran Khan and clergyman Tahir-ul-Qadri are leading the protests. They accuse Mr. Sharif of corruption, including cheating in elections.

condemn – v. to say a person or action is wrong or bad

civil rights – n. the political, economic and social rights given equally to all people of a nation

capital - n. the official center of a government; the city where a country's government is

clergy – n. a body of officials within a religious organization