Jane Goodall Gets Her Own Doll

Update Required To play the media you will need to either update your browser to a recent version or update your Flash plugin.
By Faith Pirlo
14 July 2022


The Mattel toy company has created a new Barbie doll with the famous British scientist Jane Goodall as its model.

The company released the new doll this week, the latest member of the Barbie toymaker's "Inspiring Women" series. Mattel said the doll, made from recycled plastic, honors Goodall's revolutionary research on chimpanzees in Tanzania and her efforts to protect the wild animals.

The 88-year-old Goodall said she was "thrilled" to partner with Barbie. 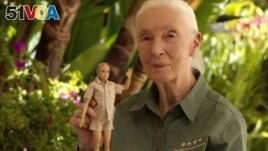 "My entire career, I've wanted to help inspire kids to be curious and explore the world around them – just like I did...," she said.

The doll is dressed in a light brown shirt and shorts, much like that seen in the many images of Goodall at work in Africa. It also comes with a notebook, binoculars, and another doll modeled on the real chimp Goodall named David Greybeard.

He was the first chimpanzee with which she built trust in Tanzania's Gombe National Park. The relationship permitted her to study the animals extremely closely.

"I wanted a doll to be me even before this idea came up," the 88-year-old scientist told Reuters. She praised Mattel for developing new Barbies that represent a wider number of working women.

"There's all kinds of astronauts and doctors and things like that," she said. She noted that many children learn about her in school.

"They'll be thrilled to have the Barbie doll," she said.

Lisa McKnight agrees. She is the Executive Vice President and Global Head of Barbie and Dolls for Mattel.

"We hope that this collection" she said, "inspires kids to learn more about green careers, how they can protect the planet, and act out sustainable stories through doll play."

Goodall started her research in what is now Tanzania in the 1960s. She produced massive amounts of research on wild chimpanzees over the years. She documented how they made and used tools, lived in communities, and showed a high level of emotional understanding.

Mattel's Barbie division has teamed up with the nonprofit Jane Goodall Institute to support several projects centered on ecology-related careers. The company released the Barbie on July 14, World Chimpanzee Day. The day also marked the 62nd anniversary of Goodall's arrival at Gombe.

Goodall wants to teach children that if they want to have a good effect on the changing environment, they must act.

Goodall said, "Hope is about action... Climate change, loss of biodiversity, poverty, unsustainable lifestyles, pollution, you name it. We reach out to others because there are people working on each one of these problems..."

doll – n. a child's toy in the form of a baby or small person

inspire – v. to move (someone) to act, create, or feel emotion

binoculars – n. a pair of tubes with glass lenses at the ends that you look through to see things far away

biodiversity – n. the number and kinds of plants and animals that exist in a particular area or in the world generally

unsustainable – adj. not able to last or continue for a long time; not sustainable