Update Required To play the media you will need to either update your browser to a recent version or update your Flash plugin.
By
19 December 2022

The charges included conspiracy to defraud the United States, obstruction of an official proceeding of Congress, conspiracy to make a false statement, and aiding an insurrection. 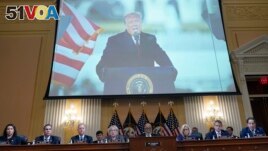 A video presentation plays as the House select committee investigating the Jan. 6 attack on the US Capitol holds its final meeting on Capitol Hill, Dec. 19, 2022. (AP Photo/Jacquelyn Martin)

Committee chair Bennie Thompson of Mississippi said, "We have every confidence that the work of this committee will help provide a roadmap to justice."

Thompson said Trump "lost the 2020 election and knew it," adding, "but he chose to try to stay in office through a multi-part scheme to overturn the results and block the transfer of power." Transfer means the exchange of power from one group to another.

Republican Representative Liz Cheney is the vice chairwoman of the special committee. She said in opening comments: "Every president in our history has defended this orderly transfer of authority, except one.''

All nine committee members voted to approve its final report. The report will include its findings on the January 6, 2021, attack at the U.S. Capitol building.

A shortened version of the report called Trump the "central cause of Jan. 6th" saying, "None of the events of Jan. 6th would have happened without him."

It said Trump engaged in a "multi-part conspiracy" to overturn the election. They included purposely spreading false accusations of voter fraud, pressuring Congress, the Justice Department, and his vice president to join his efforts. The efforts, the committee said, were meant to overturn election results to stay in power. The committee also said Trump refused to tell his supporters to leave the Capitol on January 6. The full report is expected to be released on Wednesday.

The criminal referrals by the committee have no real legal standing. The Justice Department must decide whether to bring legal action against Trump.

The criminal referrals by the committee, however, place additional pressure on Attorney General Merrick Garland and special counsel Jack Smith. Smith is investigating the events of January 6 and Trump's actions.

Trump has already launched a campaign to run for president again in 2024. He has long said the committee is unfair and political.

Both the Justice Department and the Trump campaign did not immediately answer requests for comments from news agencies.

When asked about the January 6 committee's report, White House press secretary Karine Jean-Pierre said, "The President has been very clear our democracy continues and remains under threat." She added, "The committee has been doing important, bipartisan work to get to the truth of what happened on that very day so that we can make sure that doesn't happen again."

conspiracy –n. a secret plan by two or more people to do something that is harmful or illegal

defraud –v. to use criminal methods to get money, trick or cheat people

obstruction –n. (legal) the crime of preventing police or law enforcement from learning the truth about a matter being investigated

proceeding –n. (legal, often plural) the process of appearing before a court of law (usually) so that a decision can be made

insurrection –n. an often violent attempt to take control of a government

dissolve –v. to officially end something

scheme –n. a smart often dishonest plan to do something