Update Required To play the media you will need to either update your browser to a recent version or update your Flash plugin.
By Dan Novak
22 June 2022


A Japanese court has ruled that the country's ban on same-sex marriage does not violate the constitution.

The decision this week by a district court in Osaka disagreed with a ruling last year by a Sapporo court that found the ban on same-sex marriage unconstitutional.

Activists had hoped the Osaka court would agree with the Sapporo court's decision. That could have raised pressure on Japan's central government to consider the issue further. 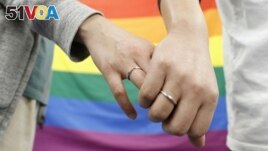 Plaintiffs hold hands with each other after a district court ruled on the legality of same-sex marriages outside Sapporo district court March 17, 2021, in this photo taken by Kyodo

Japan is the only Group of Seven nation that does not permit people of the same gender to marry.

Three same-sex couples brought the case in Osaka. In addition to rejecting their claim that the ban on same-sex marriage was unconstitutional, the court denied their demand for about $7,400 in damages for each couple.

"I actually wonder if the legal system in this country is really working," said one of the plaintiffs, Machi Sakata. She married her American partner in the United States. The two are expecting a baby in August.

"I think there's the possibility this ruling may really corner us," Sakata added.

Japan's constitution defines marriage as being based on "the mutual consent of both sexes."

But gay rights activists were hopeful in the Osaka case. Tokyo introduced partnerships for gay couples last week, and public support for same-sex marriage is rising in Japan.

The Osaka court ruled that marriage was defined as being only between opposite genders. The court also said there has not been enough debate on same-sex marriage in Japanese society.

The lawyer representing the plaintiffs, Akiyoshi Miwa, told Reuters his legal argument centered on the idea that "we wanted same-sex couples to have access to the same things as regular couples." He said an appeal of the ruling was planned.

Taiwan is the only Asian country that has legalized same-sex marriage.

Under current rules in Japan, members of same-sex couples are not permitted to legally marry. They also cannot inherit each other's belongings or property, like a house they may have shared. They also have no parental rights over each other's children.

Partnership registrations issued by local governments help same-sex couples rent property together and have hospital visitation rights. But they do not give them the full legal rights enjoyed by heterosexual couples.

Prime Minister Fumio Kishida has said the issue needs to be carefully considered in Japan. But his ruling Liberal Democratic Party has signaled that it has no plans to closely examine the matter or propose legislation. Some senior party members, however, have expressed support for reforms on the issue.

A public opinion study by Tokyo's local government late last year found that about 70 percent of people were in favor of same-sex marriage.

Activists say legalizing same-sex marriage would have far-reaching effects, both socially and economically. They say it could help bring foreign companies to the world's third-largest economy.

Masa Yanagisawa is with investment banking company Goldman Sachs. He is also a board member of the activist group Marriage for all Japan. Yanagisawa told Reuters that some international companies consider a nation's position on same-sex marriage when deciding on future business plans in Asia.

"International businesses don't want to invest in a (place) that isn't LGBTQ-friendly," he said.

Dan Novak adapted this story for VOA Learning English based on reporting from Reuters.

gender — n. a person's own sense of being male, female, some combination of male and female, or neither male nor female

corner — v. to force into a place or position from which escape is very difficult or impossible

consent — n. permission for something to happen or be done

gay — adj. sexually or romantically attracted to someone who is the same sex

access — n. permission or the right to enter, get near, or make use of something or to have contact with someone

inherit — v. to receive from someone when that person dies

heterosexual — adj. sexually attracted to people of the opposite sex