Japan to Ease Restrictions on its Military

Update Required To play the media you will need to either update your browser to a recent version or update your Flash plugin.
By VOA
07 July, 2014

Hello, and welcome to As It Is from VOA Learning English.

Today, we report on the Japanese government's decision to ease some restrictions on the country's military. 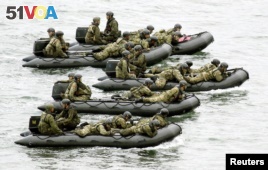 Japan Self-Defense Force (JSDF) soldiers ride rubber boats as they move toward Eniyabanare Island during military exercises, near the town of Setouchi on the southern Japanese island of Amami Oshima, Kagoshima prefecture, May 22, 2014.

"The U.S. is going to welcome this, definitely, given that the U.S., for a long time, has wanted more out of its Japanese ally."

The new rules enabling Japan's military to exercise the right to "collective self-defense" -- that is our subject today on As It Is.

The conservative government in Japan has decided to change the official interpretation, or understanding, of the country's anti-war Constitution. Some observers are calling the proposal the biggest change in meaning since the constitution took effect 67 years ago. United States officials wrote the document following Japan's surrender at the end of World War II.

Some Japanese and people in other nations oppose the change. The opposition is especially strong in the areas that suffered from Japanese colonial rule in the first half of the 20th century.

But Japanese Prime Minister Shinzo Abe is defending his effort to change the meaning of Article 9 of the Constitution, which says Japan will not make war.

The cabinet approved the change last week. It would give Japan the right to exercise what is being called "collective self-defense."

The prime minister spoke to reporters about the change. He said some people mistakenly believe it means Japan could become involved in a war to help other countries.

Mr. Abe says the reinterpretation of the 1947 Constitution would only permit what he calls "the minimum necessary measures for our self-defense."

Foreign Ministry spokesman Hong Lei says Japan must respect the security concerns of its neighbors. He says Japan should not harm China's security and should not damage peace in the area.

Thousands of protesters gathered in front of the prime minister's office. Some of them had signs that compared Mr. Abe to the former German leader Adolf Hitler.

Other protestors urged Mr. Abe not to, in their words, "destroy" the constitution.

A man shouts during a protest at the Japanese prime minister's office about the Japanese government's plan to reinterpret the constitution to permit Japan's military a larger international role.

Among those protesting was university student Jinishiro Motoyama. He is worried that the cabinet's decision to ease restrictions on the armed forces could be the first step on the path back to Japanese militarism.

"This is a significant change in the Japanese history. It's not a good way or a clever way to go. If Mr. Abe changes Article 9 we can't imagine what's going on with the next Cabinet or in the future."

The protest took place a day after one man set himself on fire at a Tokyo train station and survived. He had earlier shouted his opposition to the change.

Also last week, some South Koreans gathered at the Japanese embassy in Seoul to show their opposition to the change.

The protestors called for the Japanese prime minister to stop his attempt to lift the ban on collective self-defense.

Park Hwee-rhak is a political science professor at Kookmin University. He says South Korea and Japan are already in what he calls an "indirect alliance" because the U.S. military operates bases in both countries. The U.S. military would use those bases to defend the two Asian neighbors if they are attacked. Professor Park says this means South Korea would need to cooperate with Japan if there is an attack on the South by North Korea.

In his words, South Korea "should not view Japan's decision too emotionally." He says his country should recognize Japan's right of collective self-defense on one condition: South Korea should receive "Japan's promise that it will not adopt policies of militarism or territorial expansion in the future."

South Korea's foreign ministry says any Japanese exercise of collective self-defense on the Korean peninsula "cannot be accepted unless we request it or agree to it."

Jeffrey Hornung teaches at the Asia-Pacific Center for Security Studies in Hawaii. He says the United States military will be pleased with Japan's new understanding of its constitution.

"The U.S. is going to welcome this, definitely, given that the U.S., for a long time, has wanted more out of its Japanese ally."

If Japanese lawmakers agree, the move will permit Japan's armed forces to rescue foreign or United Nations peacekeepers if attacked. And Japanese forces would be able to expand the use of their weapons. But the government says even with the change, Japanese troops would not be permitted to go to areas of conflict.

A majority in both houses of Japan's parliament has to approve the changes for them to take effect. The governing Liberal Democratic Party has a strong majority in the lower house and controls the upper house with the support of a coalition partner.

Recent public opinion surveys showed that at least half of those Japanese questioned oppose a stronger military.

Last month, the China Daily newspaper published an editorial on the subject. The newspaper said East Asian countries should be vigilant, or watchful against Prime Minister Abe's moves. It said, "Japan is the only Asian country that has inflicted tremendous harm on its neighbors with its military aggression before and during World War II."

Japan's Self-Defense Forces were created 60 years ago to replace the defeated Imperial Japan military. Allied forces broke up the Imperial military after the end of World War II.

And that's our program for today. It was based on stories from VOA reporters Steve Herman, Victor Beattie, Youmi Kim and Shannon Van Sant.

We present a new As It Is every day at 0030 hours Universal Time. You can listen to and read a transcript of this program on our website -- 51voa.com

Thank you for spending some of your time with us today.

Join us tomorrow for another As It Is, here on The Voice of America.