Update Required To play the media you will need to either update your browser to a recent version or update your Flash plugin.
By Bryan Lynn
30 December 2021


Japan's government says it will treat radioactive wastewater from the damaged Fukushima nuclear center and pipe it into the sea.

The plan, announced this week, includes guidelines for compensation to be paid to local businesses affected by the release.

The radioactive water will be treated and diluted before being released into the Pacific Ocean. 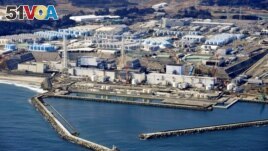 The plan calls on the International Atomic Energy Agency (IAEA) to complete a report on its findings about the safety of the treated water.

Fishermen and people living in the area have opposed the release of more than 1 million tons of water beginning in the spring of 2023. Neighboring China and South Korea have also objected to the plan.

Japan has said the water release is necessary to move forward with cleanup efforts at the Fukushima center. Three reactors there suffered meltdowns after the 2011 earthquake and huge ocean waves destroyed the plant's cooling systems. The disaster forced 160,000 people to flee nearby areas poisoned by radioactive material.

The nuclear center's operator, known as TEPCO, has said Fukushima was running out of storage space for radioactive water. It released detailed plans earlier this month for the water release. They included the building of an underground passage, or tunnel, from the factory to the ocean. The tunnel is expected to be about a kilometer long and 2.5 meters around. The treated water will flow through the tunnel to the sea.

The Japanese government says the ocean release is the most realistic way to solve the water storage problem. Other methods considered included injecting the water into the ground or converting it to steam or hydrogen and then releasing it into the atmosphere.

The government describes the water to be released as "treated" and not "radioactive." But experts say it is impossible to remove all the radioactivity. TEPCO and government officials say tritium – a radioactive form of hydrogen – is the only substance that cannot be removed from the water. They say tritium is not considered harmful in small amounts.

Reuters and The Associated Press reported on this story. Bryan Lynn adapted the reports for VOA Learning English. Caty Weaver was the editor.

compensation – n. money that is paid to someone to make up for losses or damages

dilute – v. to make a liquid thinner or weaker by adding water or another liquid to it

convert – v. to change the appearance, form or purpose of something