Update Required To play the media you will need to either update your browser to a recent version or update your Flash plugin.
By Mario Ritter
28 August, 2018

The statement comes from Japan's yearly defense policy paper. The document was released on Tuesday.

The Japanese military notes that North Korea has carried out three nuclear tests and test-fired more than 40 ballistic missiles since 2016. Some of those missiles passed over Japanese air space.

The new report recognizes recent efforts by North Korea to reduce tensions with South Korea. These efforts led to the historic talks between North Korean leader Kim Jong Un and U.S. President Donald Trump in Singapore on June 12. At the meeting, the two men signed a statement. It included a general promise by North Korea to remove nuclear weapons from the Korean Peninsula. 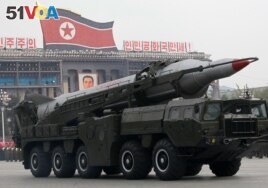 Military experts say North Korea has a large number of missiles that can threaten Japan.

Yet the Japanese military noted that, "There is no change in our basic recognition concerning the threat of North Korea's nuclear weapons and missiles."

Yoichiro Sato is a professor of international strategic studies at Ritsumeikan Asia-Pacific University in Japan.

He notes there have been many diplomatic developments involving North Korea. But he said "Japan is not likely to alter its perception of threats from North Korea."

Speaking about China, Sato said Japan is concerned about parts of China's "Belt and Road" development plan. The plan provides money for building roads, rail transportation and other projects. The goal is to help connect Asia with Europe, and even Africa. Sato said some projects, such as ports, can also be used by China's growing navy -- an important concern for Japan.

On Twitter, Trump wrote that "we are not making sufficient progress" on the issue of removing nuclear weapons from the Korean Peninsula.

The South Korean government is seeking to improve relations with the North. The South expressed regret over the cancellation of Pompeo's visit. It added, however, that it was important for the allies to seek "substantial progress" on the nuclear issue.

North and South Korea are currently involved in a number of trust-building measures. These include reunions of family members separated by the Korean War and joint Korean sports teams at the Asian Games in Indonesia.

On Sunday, North Korea announced that a Japanese man, Tomoyuki Sugimoto, would be released from detention. Sugimoto was arrested in early August and held for several weeks. The North's official KCNA news agency said he was being released for humanitarian reasons.

News reports say Sugimoto was seized for taking videos of a military area near the port of Nampo. He was first placed on an airplane going to Beijing and returned to Japan on Tuesday.

Mario Ritter adapted this story for Learning English based on VOA and Reuters news reports. George Grow was the editor.

ballistic – adj. describing a weapon that is shot through the sky over a great distance

basic – adj. relating to the most important part of something

strategic – adj. related to a plan for meeting a military or political goal

perception – n. the way that someone is understood or thought about

sufficient – adj. having provided as much as is needed