The International Center for Missing and Exploited Children says 99 countries in the world still do not make possession of material showing children in sexual activities a crime.

But now, Japan's parliament has changed that number.

Japanese lawmakers have approved a measure that makes possessing such material a crime. The move comes after many years of international pressure. 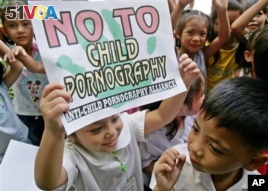 Filipino children show signs against child pornography during the start of a nationwide alliance to combat the growing problem in the Philippines.

Under a new Japanese law, people found guilty of possessing child pornography will be jailed for up to one year. Or, they will face financial punishment of about $10,000.

And nobody knows that better than a man named Ernie Allen.

Mr. Allen is president and chief executive officer of the International Center for Missing and Exploited Children. He says his agency worked with Japanese officials for years to bring about this new law.

"Ninety-nine still don't criminalize possession. And they are overwhelmingly countries in Asia, Africa and the Middle East. All of Europe now criminalizes possession of child pornography. All of North America (criminalizes possession.) ... And we hope that Japan will now be viewed as a leader in this area and can help influence other governments, other parliaments to take action."

Japan did take longer than other countries with similar economies to make reforms. But Mr. Allen says he hopes Japan will cause further changes around the planet, especially in Asia and Latin America.

Mr. Allen names what he calls "significant countries" that still do not criminalize owning child pornography such as China, Russia and Argentina. 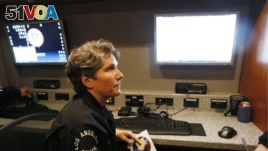 In 2002, the Center for Missing and Exploited Children started a Child Victim Identification Program. They asked law enforcement agencies from around the world to send images they received of exploited children.

"(In) 2002 there were 50,000 images. By 2005 the Center had received 1.9 million images. Last year alone the Center received and reviewed (considered) 22 million images and video. That's how much this problem has exploded around the world because of the advent of the Internet."

The new law in Japan is expected to take effect next month. However, punishment for owning child pornography will not be enforced for a year. The reason: Japan says it hopes that many people will dispose of the material on their own.