Update Required To play the media you will need to either update your browser to a recent version or update your Flash plugin.
By Bryan Lynn
27 September 2022


Japan honored its former Prime Minister Shinzo Abe Tuesday at the country's first state funeral for a former leader in 55 years. But the high cost of the state-financed ceremony was widely criticized, and some groups protested to show their opposition.

The funeral started with Abe's ashes being carried into Tokyo's Nippon Budokan Hall by his widow, Akie. Then, a military band played the country's national anthem and a moment of silence was observed.

Thousands of mourners flooded to lookout points near the hall early Tuesday to pay their last respects. Within hours, at least 10,000 people had placed flowers along the way, Japanese television reported. 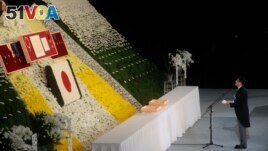 At the funeral, a video was shown that looked back on Abe's life in politics. The video included a 2006 parliamentary speech in which he promised to build a "beautiful Japan." It also remembered his visits to disaster-hit northern Japan after the March 2011 tsunami.

Japanese Prime Minister Fumio Kishida offered a 12-minute remembrance of Abe. He praised the former prime minister as a politician with a clear vision for post-World War II economic growth. Kishida said Abe's policies centered on national security and the development of Japan, as well as his often stated goal to seek a "free and open Indo-Pacific."

"You were a person who should have lived much longer," Kishida told the crowd, while looking up at a large picture of Abe. "I had a firm belief that you would contribute as a compass showing the future direction of Japan and the rest of the world for 10 or 20 more years."

Kishida promised to try to carry on Abe's policies for Japan and the whole Asia area.

Abe was Japan's longest-serving modern political leader. He was cremated in July following a private funeral at a Tokyo temple. That ceremony came days after he was killed while giving a campaign speech in western Japan.

Tokyo was under high security for the state funeral, especially close to the hall where it took place. At a protest in downtown Tokyo, thousands of people marched toward the hall, many shouting and holding signs stating their opposition. Some demonstrators held signs declaring "No state funeral."

Japan's main political opposition parties boycotted the funeral. The government has said the ceremony was not meant to force anyone to honor Abe. But the decision to give him a state funeral was made without parliamentary debate or approval. The reported cost of the ceremony was $11.5 million.

Abe's killing led to a series of new revelations about ties between lawmakers in the ruling Liberal Democratic Party (LDP) he once led and the Unification Church. Critics have called the church a cult that seeks to collect donations while brainwashing believers.

Media coverage of the party's ties to the church have led to increased criticism of the LDP's Kishida. His support ratings recently reached their lowest point ever. Kishida apologized for the ties and promised to cut party relations with the church.

contribute – v. to give something, especially money, to provide or achieve something together with other people

compass – n. an instrument that shows you which direction you are going in

revelation – n. a piece of information that gets discovered, even though it was supposed to remain private

cult – v. a religious group whose ideas are considered strange by many people

brainwash – n. to make someone believe something by telling them it is true over and over