Update Required To play the media you will need to either update your browser to a recent version or update your Flash plugin.
By Hai Do
08 July 2022


Former Japanese Prime Minister Shinzo Abe has died after being shot in the chest during a campaign speech Friday, medical officials said.

The attack shocked Japan, a nation with some of the most restrictive gun control laws in the world.

The 67-year-old Abe died at a hospital in Nara. He had been getting treatment there for gunshot wounds from what police described as a handmade gun. 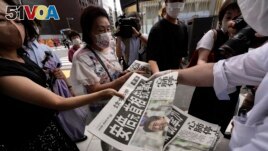 Abe was Japan's longest-serving prime minister. He resigned in 2020 because of a health problem.

Videos from Japanese broadcaster NHK showed Abe speaking at a train station in Nara when two gunshots rang out. The former prime minister fell to the ground while holding his chest. His shirt was covered in blood.

Medical officials said Abe was not breathing and his heart had stopped after being airlifted to the hospital. Doctors tried to stop the bleeding and gave him a blood transfusion. They said Abe had deep wounds to the heart and the right side of his neck.

Police arrested the suspected gunman at the place of the attack. The suspect has been identified as 41-year-old Tetsuya Yamagami of Nara. He served in Japan's navy for three years until 2005.

NHK reported that the suspect told the police that he was not pleased with Abe and wanted to kill him. The man also said he had made several handmade explosives and guns in the past.

Japan has very restrictive gun laws that make it almost impossible to buy a gun.

Even before the shooting, Abe was expected to have a major impact on Sunday's election. During his years in office, Abe pulled Japan out of an economic recession. He built strong ties with the United States and wanted to counter China's growing strength in Asia. His goal of rewriting the nation's pacifist constitution failed because of poor public support.

Japanese officials have said the election planned for Sunday will still take place.

U.S. President Joe Biden said, "This is a tragedy for Japan and for all who knew him." Similar messages of shock and sadness came from leaders around the world, including from neighboring China and Russia, as well as from across Asia and Europe.

The attack shocked Japan. With a population of 125 million, the country had just 10 gun-related criminal cases last year. Police said eight of those cases were related to gang activities. Tokyo, a city of nearly 14 million people, had no gun incidents, injuries or deaths last year.

Shiro Kawamoto is a professor at the College of Risk Management at Nihon University in Tokyo. He said, "Japanese people are in a state of shock."

Kawamoto added, "This serves as a wake-up call that gun violence can happen in Japan, and security to protect Japanese politicians must be re-examined."

Hai Do adapted this story for Learning English based on reports from VOA News, The Associated Press and Reuters.

chest - n. the front part of the body between the neck and the stomach

blood transfusion - n. e medical treatment in which someone's blood is put into the body of another person

pacifist - n. belief that war and violence are wrong