Update Required To play the media you will need to either update your browser to a recent version or update your Flash plugin.
By Mario Ritter
15 November, 2017


As the United States pulls back from large free trade deals in the Asia-Pacific, Japan is competing with China for influence in the area.

Japan is discussing deals to build a train line in the Philippines, a seaport in Cambodia, and a free trade agreement for countries around the Pacific Ocean. 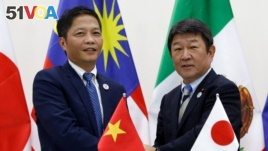 Japan led the remaining countries to a revised deal at a meeting last week of the 21-nation Asia-Pacific Economic Cooperation group in Vietnam. The new free trade deal is called the Comprehensive and Progressive Agreement for Trans-Pacific Partnership.

Japanese Prime Minister Shinzo Abe was among the leaders at the Association of Southeast Asian Nations, or ASEAN, meeting in the Philippines this week.

The 10-member ASEAN group agreed to upgrade a nine-year-old trade agreement with Japan. A spokesman for Abe, Norio Murayama, said Japan hopes to secure trade routes through Southeast Asia to markets as far away as Africa.

Murayama said, "For Japan, the country surrounded by the sea, a maritime order is extremely important." He raised concerns, however, about the safety of shipping through the region.

Jeffrey Kingston is a writer and instructor at Temple University Japan. He said there are concerns that China may seek total control over navigation in the South China Sea.

"A lot of Japanese investment, a lot of factories' offshore operations (are) located there," he said.

China and Japan still face difficult issues linked to Japan's activities before and during World War II. The two countries also have conflicting claims to some small islands in the East China Sea.

Japanese direct aid around the world increased by 12.7 percent last year to $10.37 billion. The foreign ministry says on its website that Japan is seeking to support the goals of "human security" and "sustainable development." Japan wants to do this based on the needs of individual countries.

China, however, has proposed a huge development program involving hundreds of billions of dollars. Known as the "One Belt, One Road" infrastructure campaign, the project aims to link Asia, Europe and even Africa.

He said Japan's efforts in Southeast Asia will become clearer because the U.S. is currently not as active in the region under President Trump.

Nagy said Japan has an important part to play in developing partnerships in the region. He added that Japan's efforts help balance China's expanding economic, diplomatic and security influence throughout Southeast Asia.

Ralph Jennings reported this story for VOA News. Mario Ritter adapted it for VOA Learning English. Hai Do was the editor.

route –n. a way or a path that goes from one place to another

navigation –n. moving a boat or ship over an area of water

be located –v. to be in a certain place