Japan and South Korea reached an agreement over the issue of "comfort women" in Seoul Monday.

"Comfort women" were Korean women forced to work as prostitutes in military brothels during World War II. Japan brutally occupied the Korean peninsula and other parts of Asia. 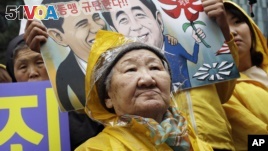 Former comfort woman Kil Un-ock who was forced to serve for the Japanese troops as a sexual slave during World War II, attends a rally against a visit by Japanese Prime Minster Shinzo Abe to the United States, in front of the Japanese Embassy in Seoul, South Korea, Wednesday, April 29, 2015. Abe has sidestepped a question on whether he would apologize for the sexual enslavement of women by Japan's army during World War II. The letters at a card read " Oppose the alliance between U.S. and Japan." (AP Photo/Ahn Young-joon)

Japan will pay over $8 million to support living "comfort women." The money will go into a South Korean fund to assist the elderly women.

In return, the Japanese government also wants South Korea to remove a statue of a young "comfort woman" that sits in front of the Japanese embassy in Seoul. "Comfort women" supporters held protests at the site each week.

Japan will also officially apologize to the women.

Over 200,000 women from the Pacific region were forced to become sex slaves during World War II. A total of 238 former "comfort women" came forward during the last 20 years in South Korea, according to the New York Times. The newspaper's count also revealed that only 46 of the Korean "comfort women" are still living.

"The 'comfort women' issue is an issue whereby many women under the then-military's involvement, bore deep scars to their honor and dignity," Kishida said. "From this perspective, the Japanese government feels responsible."

A statement released by both countries during Monday's news conference included a message from Japanese Prime Minister Shinzo Abe. The Japanese prime minister expressed "his most sincere apologies and remorse to all the women who underwent painful experiences as 'comfort women.' "

Brian Padden wrote this story for VOAnews.com. Youmi Kim in Seoul contributed to this report. Jim Dresbach adapted it for Learning English. Kathleen Struck was the editor.

prostitute – n. a person who has sex with someone in exchange for money

brothel – n. a building in which prostitutes are available

yen – n. the basic unit of money of Japan