Update Required To play the media you will need to either update your browser to a recent version or update your Flash plugin.
By Hai Do
18 December, 2018


Japan is planning a large increase in defense spending and new weapons, including refitting a helicopter carrier for new high-technology fighters.

The new defense plan is part of Abe's push to expand Japan's military power. He has long wanted to revise Japan's constitution to permit Japanese soldiers to fight in support of allied forces including American troops. The constitution, written by the U.S. after Japan's defeat in World War II, permits the use of force only for defense.

The defense plan calls for refitting an existing helicopter carrier into a ship that can deploy U.S.-made F-35B stealth fighters. 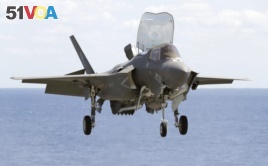 Officials say the improved helicopter carrier Izumo would be especially useful to defend disputed islands against China in the western Pacific.

A cost estimate for the refitted carrier was not given. The work will be done over five years. The ship will carry 10 stealth fighters. The plan also calls for refitting a second helicopter carrier.

The move signals a major change in Japan's naval defense. The country has not built aircraft carriers out of concerns that they may remind Japan's Asian neighbors of aggression by Japan's wartime Navy.

Officials say possession of an aircraft carrier would give Japan the ability to attack in violation of its constitution. Japan also plans to have cruise missiles designed to hit enemy targets.

She added, "Neighboring countries in Asia and the international community have long been highly concerned about Japan's moves in military and security fields."

Japanese officials said that the Izumo will be used as an aircraft carrier only when necessary for national defense. Japan's cabinet secretary added the plan "falls within the minimum necessity allowed under the constitution."

Japan's defense spending has increased for the last six years since Abe took office in 2012.

Japan plans to buy 147 fighter planes, including 42 F-35Bs, over the next few years. The American-made F-35 fighter jets cost $90 million each. The country also plans to add the U.S. Aegis Ashore missile defense system at a cost of $2 billion.

The Cabinet approved $240 billion in total defense spending over five years beginning in 2019: a record amount for Japan.

Hai Do adapted this AP story for VOA Learning English. Mario Ritter Jr. was the editor.

refit –v. to make something ready for use again, especially with new parts

revise –v. to make changes especially to correct or improve something

renounce –v. to formally give something up

stealth –adj. (technical) describing military aircraft or ships that are designed so that they cannot be easily seen by radar

construction –n. the act or process of building something