Update Required To play the media you will need to either update your browser to a recent version or update your Flash plugin.
By Andrew Smith
26 October 2022


Japan's government wants more people to sign up for digital identification cards (IDs), but the idea is unpopular.

The government is asking people to apply for plastic My Number cards which have microchips and photos. The cards connect to driver's licenses and the public health insurance plans. Health insurance cards now in use, which do not have photos, will no longer be used in late 2024. People will have to use My Number cards instead.

That change has created strong disagreement. An online petition demanding that the current health cards continue got more than 100,000 signatures in a few days. 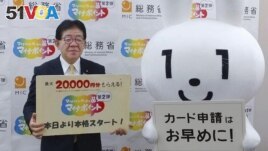 The digital card system began in 2016, but people have been slow to use it. Many Japanese worry their information might be stolen and that the digital ID violates their right to privacy.

There are other reasons people are against the digital cards. Some Japanese prefer paper and in-person meetings. Many Japanese do business in person, using cash, and many offices require people to bring paper documents. Japanese traditionally value quality work done by hand, and many also carefully save documents, keeping them in well-organized files.

Some say the current health insurance card system has been working well for decades and that going digital will create more work.

Koichi Kurosawa, secretary-general at the National Confederation of Trade Unions said people would be happier with digitization if it made their work easier and shorter. However, he said that was not the case in many Japanese workplaces.

After leaks of private information and other mistakes, many Japanese do not trust the government. They worry about the government having too much power. This is partly because of the history of authoritarian government before and during World War II.

Kurosawa said people "are worried it will lead to tighter surveillance."

Saeko Fujimori works in the music copyright business. She said she is supposed to get My Number information from the people she deals with, but many refuse to share the information.

"There is a microchip in it, and that means there could be fraud," said Fujimori, who has a My Number but doesn't plan to get the new card. "If a machine is reading all the information, that can lead to mistakes in the medical sector, too."

Getting an existing My Number digitized takes a lot of time and uses paper. People must fill out and mail back documents. Last month's deadline was extended, but only about half of the Japanese population have a My Number, the government says.

"They keep failing in anything digital and we have no memories of successful digital transformation by the government," said Nobi Hayashi, a technology expert.

Hayashi says the government's effort to get more people to get digital cards needs to be more "vision-driven."

"They don't show a bigger picture, or they don't have one," Hayashi said.

Yojiro Maeda is a researcher at Nagasaki University who studies local governments. He thinks digitization is needed, and My Number is a step in the right direction.

"You just have to do it," Maeda said.

Japan's Minister of Digital Affairs, Taro Kono, said in a recent interview with The Associated Press that more is needed to persuade people of the benefits of going digital.

Kono said, "We need to win people's understanding so that My Number cards get used in all kinds of situations."

apply –v. to ask formally for something such as a document, or a job or admission to a school

license –n. an official document that gives the holder permission to do something

petition –n. a document that people sign to show that they want a person, organization or government to do something

cash –n. money in the form of paper or coin

surveillance –n. the act of watching carefully or spying on someone or something

fraud –n. the crime of using dishonest methods to take something of value

sector –n. an area of an economy that includes certain kinds of jobs or industries

deadline –n. a date or time when something must be finished

transformation –n. a complete or major change in someone or something