Update Required To play the media you will need to either update your browser to a recent version or update your Flash plugin.
By VOA
27 October, 2015


Russia has announced plans to build five military bases, including one on the Kuril Islands. The Soviet Union seized the islands from Japan at the end of World War II. The proposed bases are a small part of Russian efforts to increase and protect trade with Asian economies.

The news of the building project on the Kurils will further strain relations between Russia and Japan. The Japanese government - which calls the islands the Northern Territories - contends the Kurils belong to them.

"If the plan is true, the Japanese government will strongly protest it," said Japan's Chief Cabinet Secretary, Yoshihide Suga. "We are unchanged in our stance that the islands are Japanese sovereign territories."

Russia's military spending has increased by $600 billion over the past 10 years. The Russian navy's Pacific Fleet is made up of 73 vessels: 50 warships and 23 submarines. In recent years, Russia has been developing closer ties with China. 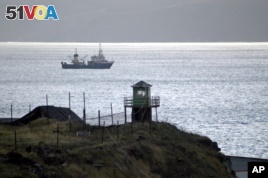 Russian has built a tower and placed border guards on Kunashir Island, one of the disputed Kuril Islands that are claimed by both Japan and Russia, in this November 2005 photo.

Both Japan and Russia know the importance of the Kurils. The islands are near waters commonly used by trade ships. Underground reserves of oil and natural gas increase the value of the islands. The fishing grounds are also good.

Grant Newsham studies security issues for the Forum for Strategic Studies in Tokyo. He admits there is "some strategic value" in holding the islands. But power and national pride also play into Russia keeping control of the former Japanese territory.

"There is really not much Japan can do," he said about Japan regaining the islands. "I don't think there ever has been much that they can do. Russia seems to have the better hand."

The current islands episode continues a history of strained relations between Japan and Russia over the Kurils. In the past, Japan refused Russia's offer to return the two smallest islands. Russian President Vladimir Putin postponed a visit to Japan because of the dispute over the Kurils.

What do you think of the build-up of Russian military on disputed islands? Let us know in the Comments section or on 51VOA.COM.

VOA's Brian Padden reported on this story. Jim Dresbach adapted this story for Learning English. George Grow was the editor.

contend(s) – v. to argue or state something in a strong and definite way

episode – n. an event or a short period of time that is important or unusual

pride – n. a feeling that you respect yourself and should be respected by others