Update Required To play the media you will need to either update your browser to a recent version or update your Flash plugin.
By John Russell
05 September 2021


Monami Ohno uses a little tool to put very small pieces of hard paper, or cardboard, on the legs of her sculpture. The Japanese artist is creating a representation of Godzilla, the huge and terrifying animal of the famed Japanese movie.

Ohno has used cardboard to create artwork for about ten years. She says she first used the material to make what she called a "bike-like thing" for a college project.

The 29-year-old makes many works of art based on popular culture, like anime robots, warplanes and fast food.

Ohno recently described her first experience with cardboard art to the Reuters news agency. She used the term "folding," or turning one part of the cardboard over or against another part.

"When I first tried folding the paper, gluing and putting them together, the people around me praised me, saying things like 'Wow, you can make this,'" she said. "That made me so happy that I have continued doing this until now." 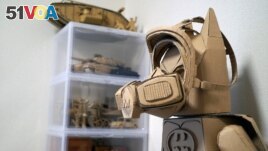 Ohno's complex sculptures have since become popular, with her work appearing at public showings in Japan and overseas.

Ohno does not use an exact plan when she makes her art. She sketches her ideas on the cardboard first. This provides general measurements of the design. She can then cut and shape her sculpture.

In a room filled with her creations, including a Lego Batman artwork, Ohno said, "I make the things I would really like to decorate my house with."

Ohno's press agent said the artist's pieces are selling for $900 to $13,000 a piece. Ohno said she is not making an environmental statement with her art, although it is made with used cardboard only.

However, she added, "it would be nice if people can see my work, which is made out of cardboard and recycled materials rather than plastics, and realize that there are these kinds of people who are involved in recycling."

Joseph Campbell reported on this story for Reuters. John Russell adapted it for Learning English. Caty Weaver was the editor.

cardboard – n. a stiff and thick kind of paper that is used especially for making boxes

sculpture –n. a piece of art that is made by carving, shaping or molding clay, stone, metal, etc.

glue – v. to make (something) stick to something else by using glue