Update Required To play the media you will need to either update your browser to a recent version or update your Flash plugin.
By Bryan Lynn
15 November 2022


A Japanese company that has produced a beloved candy for 114 years says it will be going out of business in January.

Tokyo-based Sakumaseika Co recently announced it would be forced to end operations because of rising production costs, a labor shortage and drops in sales.

The company's main and most popular product is called "Sakuma's Drops." The candy – which comes in eight different fruit flavors – has been beloved in Japan for generations. The drops are famous in Japan and even appeared in a hit anime film.

The discontinuation of the beloved candy caused some people to begin to mourn the treat. 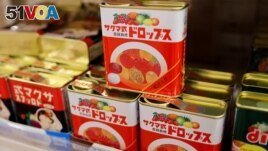 "We always had a can at home when I was in grade school," said 53-year-old sweets-shop owner Naoe Watanabe. He remembered how he used to use a 10-yen coin to lift open the container. Sakuma's Drops have been sold in candy shops for 114 years.

"It feels like a sign of the times," Watanabe said. "There are so many choices now, compared to when I was a kid."

Sakumaseika said it had not raised the price of the product in years. Many Japanese companies have been unwilling to raise prices even though their material and production costs have been increasing. Many businesses fear that passing along those costs would turn off many buyers.

The future of Sakumaseika's 100 or so employees remained uncertain, a company representative said. Company officials did not provide comment to reporters from Reuters news agency.

Sakumaseika was established in 1908 by candy maker Sojiro Sakuma. The company produced the candy through air attacks during World War II.

The drops appeared in the 1988 anime film Grave of the Fireflies, which is set during the war. In it, an orphaned girl, struggling to survive with her brother, carries with her the red can of Sakuma's Drops. It is one of the children's few belongings after their home is destroyed.

Hiroshi Matsuzawa is a store owner on a popular Tokyo shopping street. He told Reuters that Sakuma's Drops were mostly popular with older people. He noted that a lot of children are now uninterested in the candy because they have so many other products to choose from.

Teruyo Ishiguro runs a small food store that traditionally is visited by many children walking home from school. She said she had stopped carrying Sakuma's Drops last year because most buyers were in their 50s or older.

"It's very sad to see something disappear that's been around for so long," said Ishiguro, who had been selling the candy for more than 60 years.

flavor – n. the taste of a particular food or drink

grade – n. a school class in which all children are of similar age or ability