Update Required To play the media you will need to either update your browser to a recent version or update your Flash plugin.
By VOA
22 April, 2018

That is the name of a popular Japanese animation television series. It was Nagumo's favorite show when he was a child. The series features huge, human-controlled machines in battle.

Now Nagumo has made the show come to life. He has built a large robot inspired by the machines.

The robot is called LW-Mononofu. The farming machinery company Sakakibara Kikai developed it. The robot is 8.5 meters tall, has two legs and weighs more than seven metric tons. It has a seating area with monitors, and devices for the pilot to be able control the robot's arms and legs. 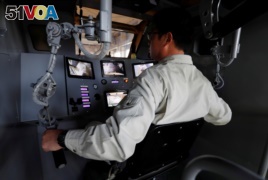 The 44-year-old Nagumo spoke to the Reuters news agency about the popularity of the "Mobile Suit Gundam" series. It inspired movies, manga, video games and more. And so, he suggested the robot could be popular as well.

"I think this can be turned into a business opportunity," Nagumo said.

Sakakibara Kikai develops robots and entertainment machines in addition to its main agriculture equipment business. For a rate of about $930 an hour, people can rent the machines for children's birthday parties and other events, Nagumo said.

The company has created robots of all sizes. There is the almost 3.5-meter-tall Landwalker, the smaller Kid's Walker Cyclops, and the MechBoxer boxing machine.

But the Mononofu stands above them all. It also does more complex movements. It can move its fingers and turn its upper body, and walk forward and backward. However, it moves very slowly – at a speed of less than one kilometer per hour.

Although it may be slow, the Mononofu is very powerful. The bazooka-like air gun on its right arm shoots balls of soft material at 140 kilometers per hour.

"As an anime-inspired robot that one can ride, I think this is the biggest in the world," Nagumo said.

But Mononofu might be a bit too large. It is unable to leave the factory without being taken apart because it was built taller than the entrance.

Megumi Lim reported this story for the Reuters news service. Pete Musto adapted it for VOA Learning English. Ashley Thomspon was the editor. We want to hear from you. How have artists and engineers worked together to use science and technology for entertainment in your country? Write to us in the Comments Section or on 51VOA.COM.

animation – n. a way of making a movie or television show by using a series of drawings, computer graphics, or photographs of objects , such as puppets or models, that are slightly different from one another and that when viewed quickly one after another create the appearance of movement

inspired – v. to make someone want to do something

monitor(s) – n. a device that is used for showing, watching, or listening to something

manga – n. a style of Japanese comic books and graphic novels, typically aimed at adults as well as children

video game(s) – n. an electronic game in which players control images on a television or computer screen

bazooka – n. a military weapon that rests on a person's shoulder and fires small rockets at tanks

anime – n. a style of animation that was created in Japan and that uses colorful images, strong characters, and stories that have a lot of action