Japan's Abe to Visit Pearl Harbor; Will Not Apologize for Attack

Update Required To play the media you will need to either update your browser to a recent version or update your Flash plugin.
By Christopher Jones-Cruise
06 December, 2016


Japan says Prime Minister Shinzo Abe will not apologize for his country's 1941 attack on United States forces when he visits Pearl Harbor, Hawaii later this month.

Wednesday marks the 75th anniversary of the attack on the U.S. naval base at Pearl Harbor.

Japanese warplanes dropped bombs that sunk the battleship USS Arizona. They also damaged or destroyed 20 other ships and 164 planes. More than 2,300 Americans were killed. 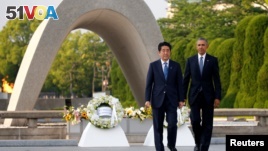 U.S. President Barack Obama (R) and Japanese Prime Minister Shinzo Abe walk in front of a cenotaph after they laid wreaths at Hiroshima Peace Memorial Park in Hiroshima, Japan, May 27, 2016.

The attack led to the American entry into World War II. The day after the attack, Congress declared war on Japan.

The war ended after the U.S. military dropped atomic bombs on the Japanese city of Hiroshima and Nagasaki. The two attacks killed more than 210,000 people. Six months ago, Barack Obama became the first U.S. president to visit a memorial to the bombing in Hiroshima while still in office.

Tuesday, Japan's Chief Cabinet Secretary, Yoshihide Suga, said the prime minister will visit Pearl Harbor on December 26th and 27th. He said Abe's visit is designed "to show his commitment towards the future and to never repeat the tragedy of the World War, as well as to send a message of reconciliation between the U.S. and Japan."

Abe's visit will be the first by a Japanese leader since the attack.

Matthew Linley is a professor in the Department of International Programs at Nagoya University. He said that Abe and his supporters consider the visit a sign that the two countries now have strong relations.

"This is also seen within Japan as -- especially for Abe and his supporters -- as being kind of a final conclusion of the post-war period. For Japan, the post-war period, many of them feel that relations now are completely normalized between the two countries. And that, even though it was of course controversial for President Obama to visit Hiroshima and controversial for Prime Minister Abe to visit Pearl Harbor, I think especially within Japan there's a lot of support for Prime Minister Abe to make this visit.

"But the main point that the media seems to be making is that this is a good move, but it's tied to a number of, of different things. One thing is of course the Donald Trump incoming presidency -- Japan really wants to create a good relationship with Donald Trump because Japan is very worried about China and the South China Sea and North Korea's missile program. Because Trump made some critical comments of Japan and the US-Japan alliance during the campaign, Japan is very concerned about trying to create good relation(s) with the United States and all eyes I think are on the Trump administration coming forward."

Linley noted that Abe was the first foreign leader to meet with Trump. The two spoke in New York last month.

During the campaign, Trump criticized Japan and other nations where the U.S. military has troops. He said they should be paying more for the security the troops provide.

Grant Newsham is a senior research fellow at the Japan Forum on Strategic Studies. Newsham says "Trump's statements while he was a candidate suggesting that Japan was not doing enough for its defense and not paying enough for the services of U.S. forces really frightened the Japanese government."

reconciliation – n. the act of causing two people or groups to become friendly again after an argument or disagreement

commemorate – v. to do something special in order to remember and honor (an important event or person from the past)