Update Required To play the media you will need to either update your browser to a recent version or update your Flash plugin.
By Phil Dierking
16 September, 2018


Japanese Prime Minister Shinzo Abe has reconfirmed his support for changing the country's constitution to permit the creation of a military force.

"Let's fulfill our mission by clearly writing in the constitution the Self-Defense Forces that protect peace and independence of Japan," Abe said. He spoke in a televised speech to members of his Liberal Democratic Party.

Grant Newsham is a top researcher at the Japan Forum for Strategic Studies in Tokyo. He told VOA that the Japanese government already understood the constitution's Article 9 as permitting the creation of a self-defense force. Now, he said, Abe wishes to officially change it. He wants the constitution to recognize Japan's Self-Defense Force as a legal organization with the aim and position of protecting the country. 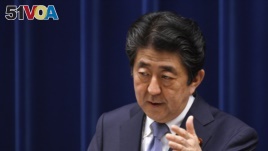 Japan's Prime Minister Shinzo Abe answers a question from a journalist during a press conference at the prime minister's official residence in Tokyo, July 20, 2018.

Article 9 was added to Japan's constitution after Japan's involvement in World War II. It states that the country surrenders its right to an armed force.

However, Sejong University professor Yuji Hosaka says there is some good to the idea of changing the constitution.

First, he said, the Japanese "can have legal military forces in their country," adding that the current force violates the constitution. Also, Hosaka said legalization would permit the country to send troops overseas and take military action.

The language of Article 9 limits Japan's offensive abilities, said Jonathan Miller an expert with the EastWest Institute. He said the possible threats from both North Korea and China are important reasons for Japan to change its constitution.

"Some of the capabilities Japan feels it needs to defend itself are becoming complicated by its constitution," Miller said.

Japan holds elections on September 20. Experts told VOA that support for Abe among LDP members is high and will likely result in another three-year term. This would make Abe Japan's longest-serving prime minister.

Abe's closest competition is former defense minister Shiguru Ishiba, but he is not expected to beat Abe.

Evan Rees, an Asia-Pacific expert with STRATFOR, told VOA, "nearly 80% of lawmakers will vote for Abe in the internal elections, and that's matched by another 60% rank-and-file party members."

Getting the revision passed

Abe has said he hopes his party can present a proposed change to Article 9 before the end of the year if he is reelected.

Currently, the LDP holds about 60 percent of the seats in parliament. It takes a two-thirds majority to present any constitutional changes to the public for a vote. The LDP will need support from its coalition partner, the Komeito, to get such action.

However, the Komeito has been "historically opposed to constitutional change," said Rees.

If the measure passes parliament, a public vote is then held, and a simple majority must vote in favor of it.

But Rees said the public is divided on the issue, with research showing about 44 percent in favor and 46 percent opposed.

This story was originally reported by Steve Miller for VOANews. Phil Dierking adapted this story for VOA Learning English. Caty Weaver was the editor.

capability - n. the ability to do something

interpret - v. to explain the meaning of (something)

offensive - n. relating to or designed for attacking an enemy