Update Required To play the media you will need to either update your browser to a recent version or update your Flash plugin.
By Phil Dierking
27 June, 2018


A Japanese spacecraft arrived at an asteroid Wednesday after traveling for more than three years.

The Hayabusa2 spacecraft is to perform a new experiment. It will create a crater on the asteroid's surface collecting pieces of rock to bring back to Earth. 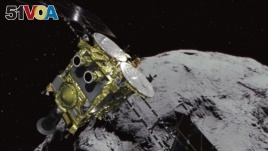 Over the next year and a half, the robotic explorer will attempt three short landings to gather rocks. If they are successful, the asteroid material could provide information about the beginning of the solar system and possibly life on Earth.

Space officials say however that the mission will be difficult.

Hayabusa2 will spend about two months looking for safe landing places on the rough surface. Because of the high surface temperature, it will stay for only a few seconds each time it lands. Any rocks it collects would be sent back in a re-entry container expected to arrive at the end of 2020.

The asteroid is named Ryugu after an undersea palace in a Japanese folktale. Ryugu is about 900 meters wide.

In photographs released by JAXA, the Japanese space agency, the asteroid appears to be more square-shaped than round. A number of large craters can be seen. Project Manager Yuichi Tsuda described the asteroid in an online post. He said the rough surface will make choosing landing places "both interesting and difficult."

Hayabusa2 will reposition itself on the other side of the asteroid to protect itself during the operation.

It will take another two to three weeks to make sure any wreckage that could damage the explorer has cleared. Hayabusa2 will then attempt to land at or near the crater to collect underground or surface material that was blown out by the explosion.

Asteroids orbit the sun but are much smaller than planets. They are among the oldest objects in the solar system. For this reason, scientists believe they may help explain how Earth developed. They may even provide information about the formation of oceans and the start of life.

Hayabusa2 was launched from Japan in December 2014. It follows the first Hayabusa mission which lasted from 2003 until 2010.

The first spacecraft in the series collected rocks from a different kind of asteroid. Hayabusa took three years longer than planned after a series of technical problems.

The U.S. space agency, NASA, also has an asteroid mission. Its Osiris-Rex spacecraft is expected to reach the asteroid Bennu later this year and return with rocks from it in 2023.

This story was originally reported by Ken Moritsugu for the Associated Press. Phil Dierking adapted this story for VOA Learning English. Mario Ritter was the editor.

DO you think asteroids can teach us about our planet?? Write to us in the Comments Section or on 51VOA.COM.

asteroid –n. objects that are smaller than planets and that usually are not perfectly round which orbit the sun

crater –n. a bowl-shaped hole formed by a falling meteorite or a volcanic explosion

palace –n. the official home of a person such as a king, queen or president

solar system –n. all the objects that orbit or are influenced by the sun's gravity

hop –v. to jump up and down