Update Required To play the media you will need to either update your browser to a recent version or update your Flash plugin.
By Hai Do
13 August 2020


Japanese businessman Katsuo Inoue chose Italy for his summer vacation this year. He enjoyed the views of Florence and Rome - without ever leaving Tokyo.

Inoue and his wife "flew" to Italy on First Airlines, a company known for entertainment, not transportation. The Tokyo-based company entered the growing virtual reality market, as people face travel restrictions because of COVID-19.

"I often go overseas on business, but I haven't been to Italy," Inoue told the Reuters news agency. "My impression was rather good because I got a sense of actually seeing things there."

The "passengers" on First Airlines sit in the first- or business-class areas of a fake airplane. They are even shown a safety demonstration and given a life vest and oxygen mask. Workers serve meals and drinks as large screens show passing clouds and other views outside the airplane.

The "travelers" then receive virtual reality eye wear that provides immersive tours of places like Paris, New York, Hawaii and Rome and other Italian cities. 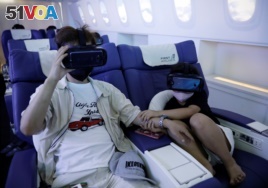 A girl holds her father's hand as she uses a virtual reality (VR) device at a check-in desk at First Airlines, that provides VR flight experiences, including 360-degree tours of cities and meals, amid the COVID-19 pandemic in Tokyo, Japan August 12, 2020.

Japan has recorded over 50,000 coronavirus infections and just over 1,000 deaths. Those numbers come from the Japanese public broadcaster NHK. A second wave of infections starting in July has stopped most travel in and out the country.

The country's biggest airline, ANA Holdings, said the numbers of passengers flying to foreign countries fell by 96 percent in June. And the International Air Transport Association (IATA) predicted last month that it would take until the year 2024 for international travel to recover.

But First Airlines says business has increased by 50 percent since the start of the coronavirus restrictions.

Its president, Hiroaki Abe, said, "We get some customers who normally travel to Hawaii every year and they can experience some of that here."

The Reuters news agency reported this story. Hai Do adapted it for VOA Learning English. Ashley Thompson was the editor.

view - n. the things that can be seen from a particular place

impression - n. the effect or influence that something or someone has on a person's thoughts or feelings

mask - n. a covering for your face or for part of your face

vest - n. a special piece of clothing that you wear on your upper body for protection or safety

screen - n. the usually flat part of a television or computer monitor that shows the images or text