Update Required To play the media you will need to either update your browser to a recent version or update your Flash plugin.
By Anjana Pasricha and Fern Robinson
16 December, 2015 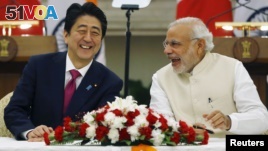 The transportation deal calls for Japan to provide $12 billion to build and equip a bullet train route to run in the western part of India.

Two military defense pacts were signed. One agreement makes it possible for Japan to sell aircraft to India. The pacts also state the two countries will share military technology, equipment and information.

During the meeting, India invited Japan to participate along with the United States in naval exercises in the Indian Ocean.

The memo of understanding on civil nuclear energy is not completely finalized. But that agreement deals with Japan exporting nuclear technology to India.

Modi described India's relationship with Japan by saying, "I cannot think of a strategic partnership that can exercise a more profound influence on shaping the course of Asia and our interlinked ocean regions more than ours."

Asian analysts see the Japanese-Indian friendship as an attempt to contain China. Both India and Japan have territory disputes with China. Abe wrote in a Times of India editorial "it becomes important more and more for there to be collaboration between Japan and India..."

Anjana Pasricha and Fern Robinson wrote this story for VOAnews.com. Jim Dresbach adapted it for Learning English. Kathleen Struck was the editor.

What do you think of the relationship between Japan and India? We want to hear from you. Write to us in the Comments Section or visit our 51VOA.COM.

defense – n. the act of defending someone or something from attack