Jazz Music Gathering In Haiti Postponed Because of Security Concerns

Update Required To play the media you will need to either update your browser to a recent version or update your Flash plugin.
By Jonathan Evans
25 November 2021


Organizers of the Port-au-Prince International Jazz Festival recently announced that the music event has been postponed. The reason given was an increase in gang activity in the Haitian capital.

The festival, usually held in January, brings together musicians from more than 12 countries every year. 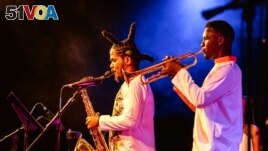 Milena Sandler is director of the Haiti Jazz Foundation which organizes the festival. She told the French News Agency, "We can't take the risk, either for the 150 musicians or for our teams or for the public."

Sandler added, "We have been thinking for a while now that it would be difficult...to stage a festive event in this context."

In recent months, gangs have gone beyond the poorer areas of Port-au-Prince and have increased the number of kidnappings.

Their control over the capital regularly prevents secure access to oil stations. As a result, fuel shortages have harmed the transportation industry. Many hospitals, businesses and schools have been forced to reduce their services.

The United States and Canada have suggested that their citizens living in Haiti have an emergency plan to leave the country.

Sandler is hopeful that the music festival will take place sometime in 2022.

"If the situation in the country does not allow for the usual format of concerts over eight days, we will still have something and it won't be virtual," she said.

Sandler added that the festival's Haitian and international partners were considering a program for the end of June.

The only time the festival has been canceled was in 2010. That year, a huge earthquake severely damaged Port-au-Prince and other towns on January 12, killing more than 200,000 people.

Jonathan Evans adapted this story for Learning English based on a report by Agence France-Presse. Mario Ritter, Jr. was the editor.

gang –n. a group of criminals

access –n. being able to get near, at, or to something or someone

format –n. the form, design or ways something is organized and presented

virtual — adj. existing or occurring on computers or on the Internet