Update Required To play the media you will need to either update your browser to a recent version or update your Flash plugin.
By VOA
15 June, 2015


The son of a former US president and the brother of another launched his campaign for the presidency Monday. Jeb Bush announced his candidacy to a cheering crowd in Miami, Florida. Mr. Bush is seeking to win the Republican Party's presidential nomination.

Saying "Our prosperity and security are in the balance," Mr. Bush raised issues of interest to many conservatives. He called for tax cuts, a strong military and less government intervention. Mr. Bush said, "There's no substitute for experience," and added, "I know we can fix this, because I've done it."

His political organization released a video before the announcement. In it, Mr. Bush said, "My core beliefs start with the premise that the most vulnerable in our society should be in the front of the line and not the back." The video showed images of a disabled child, women and minorities, while noting his record as Governor of Florida. 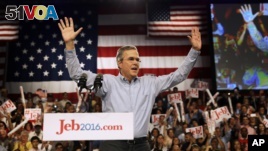 Jeb Bush served two terms as governor. He was in office from 1999 until 2007. During his term, Mr. Bush proposed the first school voucher program in the country. Under the program, students from failing schools could use public money to pay for private schools.

As governor, Mr. Bush also was a supporter of a state law that kept Terri Schiavo, a brain-damaged woman, alive with a feeding tube. The courts eventually overturned both measures.

For the 2016 campaign, Mr. Bush is a supporter for immigration reform and a new education policy, called the Common Core. Both are closely linked to the Democratic Party and rejected by other Republicans seeking the party's presidential nomination.

Jeb Bush is 62 years old. He was the first well-known Republican to signal his plans to seek the presidency. Last December, he announced on social media, "I have decided to actively explore the possibility of running for President of the United States."

However, the former governor delayed his official candidacy so that he could raise money for organizations supporting his campaign. A political action group called the Right to Rise Super PAC is looking to raise $100 million to support his campaign. The Politico website reports that Mr. Bush has attended 70 money-raising events over the past six months. Supporters connected to the Bush family attended many of these fundraisers.

Before Monday, Jeb Bush has recognized the influence of both his father, George H.W. Bush, and his older brother, George W. Bush. But he has also attempted to distance himself from his brother's unpopular policies.

"I love my brother. I love my dad. I actually love my mother as well and hope that's O.K. And I admire their service to the nation and the difficult decisions that they had to make. But I am my own man and my views are shaped by my own thinking and my own experiences," he told the Chicago Council on Global Affairs in February.

Tom DeFrank of National Journal has been watching U.S. politics for a long time. On VOA's "Issues in the News" program, he had this to say about a Jeb Bush candidacy.

"He has a tightrope to walk. He has to figure out a way to distance himself from his brother who left office as a very unpopular president."

The shadow of Iraq

In Nevada last month, Jeb Bush said President Barack Obama's withdrawal of U.S. troops in Iraq led to the current Islamic State crisis. His statement led to criticism from Ivy Ziedrich, a college student. The exchange, "Your brother created ISIS," seen on ABC News, made news around the world.

The former Florida governor stumbled when asked if he would have handled the war in Iraq differently from his brother. Jeb Bush eventually said that knowing what he knows now, he would not have ordered the invasion of Iraq.

Establishing his own political identity will be important for Jeb Bush, says University of Virginia political expert Larry Sabato.

"He wants to have it both ways as politicians always do. He wants to get the nomination because of the Bush name and at the same time he wants to declare that he is his own man," he said. "Well, you can't have it both ways and inevitably he will be held accountable to some degree for George W. Bush's very controversial presidency."

Standing out in a crowded field

The former governor of Florida joined a crowded field of 10 announced candidates for the Republican nomination, with several more to come.

Ford O'Connell has worked as an advisor to the party. He says, "Obviously, his last name is his greatest benefit in terms of raising money but it is also his greatest obstacle. What Jeb Bush needs to become is ‘Jeb', not the third Bush."

The Bush campaign made public an election logo on Sunday. The sign only has his first name "Jeb!" with no mention of his famous family.

Hai Do wrote this report for VOA Learning English with materials from VOA correspondent Jim Malone. George Grow was the editor.

prosperity – n. being successful, usually by earning a lot of money

core – adj. central; n. – the main part or center of something

premise – n. an idea or statement that is used as the basis of an argument

signal – v. to be sign of something; to show the existence of

stumble(d) – v. to speak or act in an awkward way