Update Required To play the media you will need to either update your browser to a recent version or update your Flash plugin.
By Gregory Stachel
28 November 2021


In just a few months, Afghanistan's economy has collapsed. Many formerly secure families are now in fear of how they will pay for food. This is one reason the United Nations is calling attention to a hunger crisis.

Of the 38 million people, 22 percent are nearly foodless already and 36 percent are facing immediate danger from food insecurity. This is mainly because people do not have enough money for food.

The economy was already in trouble under the former government. It often could not pay its workers. The situation was worsened by the coronavirus pandemic and by a drought that increased food prices. By 2020, nearly half of Afghanistan's population was considered poor. 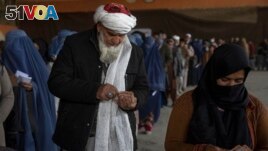 People count banknotes after receiving money from a World Food Program, in Kabul, Afghanistan on November 20, 2021. Formerly financially secure families in Afghanistan are having to depend on money from WFP to survive. (AP Photo/Petros Giannakouris)

After the August 15 Taliban takeover, other countries stopped sending money to Afghanistan. This hurt the country's already small middle class. The money sent by foreign governments once paid for much of Afghanistan's government spending. Without it, the Taliban has been unable to pay government workers or provide public services.

International aid also paid for projects around the country that provided jobs, most of which are now stopped. The country's banks are cut off from the international banking system, hurting the private economy. The country's total economy is estimated to have decreased by 40 percent in just three months.

Hospitals are seeing increasing numbers of starving children, mostly from the country's poorest families who were already insecure.

Now formerly financially secure families are finding themselves with nothing and must find ways to pay for food, housing, and medical needs.

Not long ago, Ferishta Salihi and her family had enough for a good life. Her husband was working and was paid well. She could send several of her daughters to private schools.

Then her husband lost his job after the Taliban takeover. She lined up to register for food and money from the U.N.'s World Food Program (WFP) just to survive.

"We have lost everything. We've lost our minds," Salihi said after her registration was complete. She had to take her 17-year-old daughter Fatima out of school. She does not have the money to pay for private schooling, and the Taliban is not permitting older girls to go to public school.

"I don't want anything for myself, I just want my children to get an education," Salihi said.

The United States and other international donors are sending money to Afghanistan for humanitarian aid through U.N. agencies. This guarantees the money does not go to the Taliban government.

U.N. agencies and the World Health Organization are working to pay heath care workers to keep the health system from collapsing. U.N. agencies are also providing money and food for families to provide some security.

The WFP has already had to greatly increase the program. In 2020, it provided aid to 9 million people, up from the year before. So far this year, that number has risen to nearly 14 million. It has greatly increased since August. Next year, the agency hopes to provide for more than 23 million people. It says it needs $220 million a month to do so.

Shelley Thakral is the WFP spokesperson for Afghanistan. She said it is not just the very poorest who need help. There is a new group of people in cities who up until the summer have been making money "... and now are facing hunger for the first time," she said.

She added, "People are now having to scavenge for food, they're skipping meals and mothers are forced to reduce portions of food."

Lee Keath reported this story for The Associated Press. Gregory Stachel adapted it for VOA Learning English. Susan Shand was the editor.

humanitarian – adj. help or money given to people or countries, in order to improve living conditions

scavenge – v. to search for food to eat

skip – v. to not do (something that is usual or expected)

portion – n. the amount of food that is served to a person at one time