Update Required To play the media you will need to either update your browser to a recent version or update your Flash plugin.
By Anne Ball and Kelly Jean Kelly
26 February, 2017

Today we are talking about John Adams. In 1796, he was elected as the country's second president. 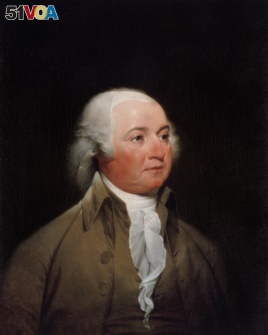 Being second can be difficult. And being the second president of a new country, following a popular first president such as George Washington, turned out to be extremely difficult.

For one thing, Adams did not always get along with other people. He was known to get angry easily, and often.

Adams also was leader of a divided administration. His own vice president often disagreed with him – passionately.

The rule worked fine for the first two elections. Washington had won the presidency, and Adams won the vice presidency. The two men belonged to the same political party and shared many points of view.

But in 1796, Adams' opponent in the election, Thomas Jefferson, became the vice president. The two men were personal friends, but political enemies.

President Adams supported a strong federal government that protected the interests of business and the wealthy. Vice President Jefferson, on the other hand, wanted to limit the power of the federal government. As a result, Adams and Jefferson often clashed.

But later, Adams learned that many of his cabinet members opposed him, too.

Historian John Ferling says Adams was "in over his head, and started swimming upstream" almost from the start of his presidency.

On top of all that, Adams faced a foreign policy crisis. After the French Revolution, Great Britain allied with other European nations against France. They wanted to keep the unrest from spreading to their countries.

Adams worked hard to make sure the U.S. did not get pulled into a war between France and Great Britain. But France did not trust the U.S. It tried to interrupt trade by seizing U.S. ships.

Adams wanted to resolve the problem peacefully. He threatened military action, but he also sent diplomats to talk with French officials.

Adams aimed for "an honorable peace" with France. It took some time but he got it.

Historian John Ferling says although the crisis in Europe caused Adams "endless trouble," he dealt with it well.

Many years later, Adams wrote that "the greatest jewel in his crown" was reaching peace with France.

Even if Adams struggled as president, he was successful in other parts of his life.

He grew up outside the city of Boston. His father was a farmer, as well as a church official and town leader. However, Adams chose to attend Harvard University and become a lawyer.

Adams was a very good lawyer. In fact, he was one of the busiest lawyers in Boston. His success enabled him to buy a big, two-story house that still stands in Quincy, Massachusetts.

Adams also had a happy marriage. The relationship between him and his wife, Abigail, is one of the best-known of that time. The two wrote many letters to each other during the years they were apart. More than 1,000 of their letters still survive today.John and Abigail Adams were both passionate patriots who supported the American Revolution. 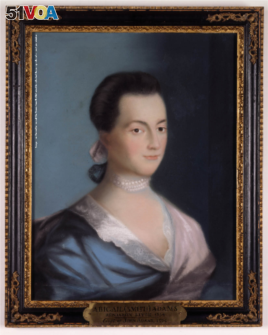 They also agreed about the issue of slavery. Unlike many founding families of the U.S., the couple did not own slaves and spoke out against the system of people owning other people.

In November of 1800, John and Abigail Adams moved to the Executive Mansion in Washington, D.C. Adams was the first president to live in what we now call the White House.

They would not stay long, however.

Adams was facing a difficult re-election campaign. His vice president, Thomas Jefferson, was running against him. His party was divided – many Federalists supported other candidates. And some voters did not like his decisions – including creating a permanent army, raising taxes, and limiting the rights of immigrants.

Those four laws – called the Alien and Sedition Acts – extended the time that immigrants had to wait before becoming U.S. citizens.

They permitted the government to detain citizens from enemy nations without reason during wartime.

The laws also permitted the president to expel foreign citizens he believed were dangerous.

And they made criticizing the president or Congress a crime.

Adams said the Acts aimed to control people in the U.S. who supported France. But many politicians at the time argued that the laws mostly affected people who supported the opposing political party.

Historian John Ferling says they were right. And, he says, Adams may have been using the Alien and Sedition Acts to protect his political career. But they ended up damaging his public image.

They also raised the question for the first time of whether states had the right to ignore a federal law if they disagreed with it.

Supporters of Vice President Thomas Jefferson used Adams' approval of the Alien and Sedition Acts against him effectively. Jefferson's campaign said Adams exercised so much power as president that he must want the U.S. to become a monarchy.

Adams' campaign said Jefferson was a radical who would bring revolution to the country.

The U.S. had never experienced such an ugly election before. Some people wondered whether the country would be able to transfer power peacefully. 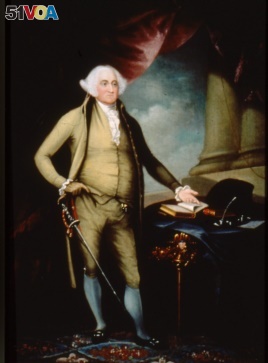 When Jefferson won, however, Adams did not resist. He retired to his farm in Massachusetts.

Adams spent most of his retirement writing. He even began exchanging long letters with his old friend – and old enemy – Thomas Jefferson.

They two men discussed their families, their thoughts on politics and religion, and their nation's history. The letters were both personally and historically meaningful: Adams and Jefferson were the last living members of the original patriots who started a new country.

On July 4, 1826 – the nation's 50th birthday – the two friends, patriots and former U.S. presidents died within hours of one another.

See how well you understand the story by taking this listening quiz. Play each video, then choose the best answer.

passionately - adv. having, showing, or expressing strong emotions or beliefs

upstream - adj. in the direction opposite to the flow in a stream or river

interrupt - v. to cause something to stop happening for a time

patriot – n. person who supported the American Revolutionary War for freedom from Britain

transfer - v. to give rights to another person

original - adj. existing first or at the beginning