Update Required To play the media you will need to either update your browser to a recent version or update your Flash plugin.
By VOA
13 August, 2014


From VOA Learning English, this is The Making of a Nation.

In October of 1859, a group of anti-slavery extremists attacked the town of Harpers Ferry. Harpers Ferry was part of Virginia then; today it is located in West Virginia.

A man named John Brown led the attack. His group seized a gun factory and a center where the government kept military equipment. They planned to use the guns and equipment to organize a rebel army of slaves. 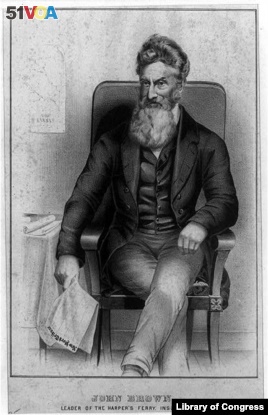 Some said John Brown was a madman. But many supported his aim to end slavery.

John Brown attacked with about twenty men. Several, including two of his sons, were killed by local militia. He and his remaining men withdrew to a small, brick building.

They expected to hold Harpers Ferry until slaves in the area rebelled and joined them. But no one came to their aid. And, the few slaves whom his men had freed refused to fight when the shooting started.

The president of the United States in 1859 was James Buchanan. He sent a force of Marines to Harpers Ferry, under the command of Army Colonel Robert E. Lee.

John Brown refused to surrender. He said he and his men had the right to go free. As soon as Brown spoke, the Marines attacked.

They broke open a small hole in the door of the brick building. One by one, the Marines moved through the hole. They fought hand-to-hand against the men inside. After a brief fight, they won. John Brown's rebellion was crushed.

The Raid Made the Dispute Over Slavery Worse

The raid on Harpers Ferry increased the bitterness of the national dispute over slavery. Members of the Democratic Party called the raid a plot by the Republican Party. Republican leaders denied the charge. They said the raid was the work of one man -- one madman. Still, they said, John Brown had acted for good reason: to end slavery in America.

Many southerners said the North was responsible for the raid. They believed all northerners wanted a slave rebellion in the South. They declared they would fight to protect their homes from another attack by men like Brown. 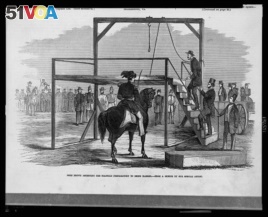 John Brown was sentenced to death.

?John Brown Died for His Cause

Brown went to trial in Charles Town, a few kilometers from Harpers Ferry. He was charged with three crimes: treason, plotting a slave rebellion and murder.

The jury found John Brown guilty of all three charges. The judge sentenced Brown to be hanged.

John Brown was executed on December 2, 1859. His death created a wave of public emotion throughout the country.

In the North, people mourned. In the South, people cheered. But their happiness at Brown's punishment was mixed with anger at those who honored him. As the nation prepared for a presidential election year, the South renewed its promise to defend slavery -- or leave the Union.