Update Required To play the media you will need to either update your browser to a recent version or update your Flash plugin.
By Ashley Thompson
07 February, 2018


North and South Koreans face a widening language divide caused by 70 years of separation. That is creating some communication problems for the two countries' first joint Olympic team as it prepares for the Winter Games in PyeongChang, South Korea.

So, the joint women's hockey team has created its own dictionary. The three-page document translates important hockey terms from English into South Korean, and then into North Korean.

Canadian Sarah Murray is the team's coach. She says the document has helped everybody communicate.

Team Korea was formed just two weeks ago after the two Koreas decided to suddenly cooperate during the Olympics. Twelve players from North Korea were then added to the 23-member South Korean team.

Language experts say about one-third of the everyday words used in the two countries are different. The divide is wider with technical language, like that used for medical and sports industries.

Murray admits that there are still some problems in communication even with the new dictionary. She said her South Korean assistant coach plays an important part in bridging the divide.

Some in South Korea have criticized the partnership. They argue that the addition of players from North Korea players may prevent South Korean players from playing as much. One early public opinion study found that about 70 percent of South Koreans opposed the joint team.

However, that opposition appears to be lessening as the Olympics near. 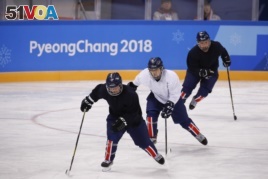 On Sunday, the joint Korean team had its first match. It played the team from Sweden, which ranks fifth in the world. A crowd of 3,000 people watched the match at a sports center in the city of Incheon. Team Korea lost 3-1. Still, many consider it a good result as neither Korea is among the world's top 20 hockey teams.

The players wore the same uniforms, each adorned with an image of a "unification flag." The teammates stood together for the playing of a traditional Korean song. But the North and South Koreans live in separate buildings in the athletes' village.

Murray said the North and South Korean players are getting along much better than she had expected. She also said she is enjoying having the North Korean players on her team. She said they are "are absorbing everything like sponges."

The North and South Korean players did not eat together at first. So, Murray said she asked them to do so.

"We sat together at the next meal and the players were laughing. They are just girls ... you know ... they are just hockey players. They are all wearing the same jersey and we are on the same team now," Murray said. "Hockey really does bring people together."

dictionary - n. a reference book that contains words listed in alphabetical order and that gives information about the words' meanings, forms, pronunciations, etc.

translate - v. to change words from one language into another language

incorporate - v. to include (something) as part of something else

match - n. a contest between two or more players or teams

uniform - n. a special kind of clothing that is worn by all the members of a group or organization (such as an army or team)

adorn (with)- v. to improve the appearance of something by adding something extra