Update Required To play the media you will need to either update your browser to a recent version or update your Flash plugin.
By John Russell
24 August 2022


The Lower Jordan River is extremely important to many people around the world. But the once powerful river has decreased – a result of conflict, competition, and a changing climate over many years.

Visitors come to the river from all over the world. Many are driven by religious beliefs to touch the river's water. 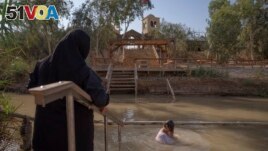 Olga Bokkas, a visitor from Connecticut, immerses herself in the waters of the Jordan River at the Qasr al-Yahud baptismal site, near the West Bank town of Jericho on Sunday, July 31, 2022. (AP Photo/Oded Balilty)

The Bible says Jesus was baptized in the Jordan River.

But the river has also been the center of conflict.

Part of the river was once a dividing line between Israel and Jordan when they fought each other. River water separates Jordan from the Israeli-occupied West Bank, seized by Israel in a 1967 war.

Yana Abu Taleb is the Jordanian director of EcoPeace Middle East, an environmental group that brings together Jordanian, Palestinian and Israeli activists.

EcoPeace has said that the Lower Jordan River, which runs south from the Sea of Galilee, is threatened by many years of water diversions for agriculture and development , as well as pollution.

Only a small percentage of its historical water flow now reaches the Dead Sea to the south. That is one reason the Dead Sea has been shrinking.

The river's eastern bank, modern-day Jordan, and its western one both have holy places, where religious events take place.

The river holds further importance as the scene of miracles in the Old Testament, the first part of the Bible.

Rustom Mkhjian is director general of the Baptism Site Commission in Jordan. In a talk with the Associated Press, he said: "Every year we celebrate interfaith harmony, and among my happiest days in my life is days when I see Jews, Christians and Muslims visit the site and the three of them cry."

EcoPeace Middle East has been urging cooperation between sides that have reasons to get as much water from the river as possible.

He said, "Any fresh water left in the river would have in the past been seen as empowering the enemy. ... You take everything that you can." Bromberg added, "There's legitimate need for the water...But the conflict creates an incentive to take everything."

"Israel, from a historical perspective, has taken about half the water, and Syria and Jordan have taken the other half," Bromberg said. He added, "The pollution that's coming into the river is coming from Jordanian, Palestinian and Israeli sides and a little bit also from Syria."

For Palestinians in the West Bank, the only way to see the Jordan River is to visit the Israeli-run baptismal site there, said Nada Majdalani, EcoPeace's Palestinian director.

"The Jordan River in the past, for Palestinians, meant livelihoods and economic stability and growth," she said. The river's decline, she added, is especially disappointing to elderly Palestinians "who remember how the river looked ... and how they used to go fishing, how they used to have a dip in the river."

Bromberg said EcoPeace has been documenting the river's condition.

Mariam Fam reported on this story for the Associated Press. John Russell adapted it for VOA Learning English.

baptize – v. to perform a Christian ceremony involving water which is meant to represent rebirth into a new life

diversion – n. the act of changing the direction or use of something : the act of diverting something

legitimate – adj. fair or reasonable; allowed according to rules or laws

perspective – n. a way of thinking about and understanding something (such as a particular issue or life in general)

stability –n. a state or quality of not being easily changed