Update Required To play the media you will need to either update your browser to a recent version or update your Flash plugin.
By Alice Bryant
28 August 2021


The remains of American-born singer and dancer Josephine Baker will soon be reburied in the historic Panthéon building in Paris. Baker, who is a World War II hero in France, will be the first Black woman to get the country's highest honor.

The official home of French President Emmanuel Macron confirms the ceremony will be on November 30 at the Panthéon. 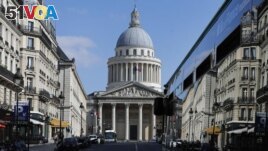 FILE - In this file photo dated Tuesday, March 31, 2020, a bus drives to the Pantheon in Paris. The remains of American-born singer and dancer Josephine Baker will be reinterred at the Pantheon monument in Paris.

After Baker's death in 1975, she was buried in Monaco, a city-state to the south of France. She was clothed in French military wear with the medals she got for her work in the French Resistance.

The French Resistance was a group of French men and women who fought the Nazi occupation of France during World War II.

Baker was born in the city of St. Louis in the U.S. state of Missouri. She moved to France in 1925 to flee racism and segregation in the United States. She became a well-known singer and performer.

Baker became famous in France for her "banana skirt" dances. She performed to crowds at Théatre des Champs-élysées and later at the Folies Bergère in Paris.

She became a French citizen after her marriage to industrialist Jean Lion in 1937.

During World War II, Baker joined the French Resistance. Her missions included collecting information from German officials that she met at parties. She carried messages hidden in her clothing to England and other countries. She used her fame to travel without being searched.

Baker was also a Civil Rights activist in the United States. She was among the official speakers at the March on Washington in 1963. The march is where Civil Rights leader Dr. Martin Luther King, Jr. gave his "I Have a Dream" speech.

Baker will be only the fifth woman to be honored with a Panthéon burial. She will also be the first performer honored.

banana – n. a long, curved tropical fruit with a thick peel that is yellow when it is ripe