Update Required To play the media you will need to either update your browser to a recent version or update your Flash plugin.
By Dan Friedell
05 July 2022


Highland Park, Illinois, a quiet, wealthy small city north of Chicago, is mourning at least six people who were killed by a gunman at a July 4 parade. The shooting wounded more than 30 others.

People attending the parade first thought the gunshots were the sound of fireworks celebrating America's Independence Day. Hundreds of people of all ages then fled in terror as a gunman fired into the crowd from the top of a building. They left behind food, a baseball hat, lawn chairs, and baby carriers bearing American flags.

Highland Park is known for its large, costly homes along Lake Michigan. About 30,000 people live there. Michael Jordan lived in Highland Park in the 1980s and 1990s when he played basketball for the Chicago Bulls. 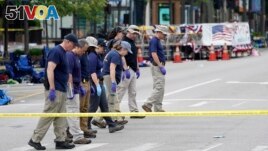 Barbara Harte, 73, lives in the city. She said she stayed away from the parade because she was worried about a shooting. She later came out of her home and told reporters "there's no safe place."

At a Tuesday news conference, officials said the 21-year-old Crimo used a high-powered rifle "similar to an AR-15" in the shooting. He fired 70 bullets into the crowd that had gathered for the parade. The suspect, they said, then dropped the weapon and fled to his mother's house.

Officials said at the news conference that he had planned the attack for several weeks. But they did not immediately know the reason behind the attack. Crimo had a similar rifle in his mother's car when he was taken by police on Monday night. He had other weapons at his home, all of which were bought legally.

Highland Park Mayor Nancy Rotering said she knew Crimo when he was a little boy. Crimo's father owned a small food business in Highland Park and once ran for mayor.

"What happened? How did somebody become this angry, this hateful?" she asked.

The Reuters news agency reported that social media posts that appeared to be linked to either Crimo or his musical act, Awake The Rapper, often showed violent images or messages. One music video posted to YouTube under Awake The Rapper, for example, showed drawings of a stick figure holding a rifle in front of another figure spread on the ground.

On Monday, President Joe Biden said he and his wife Jill were "shocked by the senseless gun violence that has yet again brought grief to an American community."

"It definitely hits a lot harder when it's not only your hometown but it's also right in front of you," Ron Tuazon told the Associated Press. He and a friend returned to the streets Monday evening to collect chairs, blankets and a child's bicycle that he and his family had left behind when the shooting began.

"It's commonplace now," Tuazon said. "We don't blink anymore. Until laws change, it's going to be more of the same."

The attack comes as Americans continue to debate about gun control and measures to prevent mass shootings in the United States.

The U.S. Supreme Court ruled last month that there is a constitutional right to carry weapons in public. The decision overturned a New York law that has been in place since 1913.

Congress last month passed its first major federal gun reform in about 30 years. The new law makes it harder for some people to get powerful weapons and makes it possible for the legal system to take guns away from people who are thought to be dangerous.

But the law does not ban sales of powerful rifles like the one used on July 4 in Highland Park.

commonplace –adj. happening or appearing in many place, not unusual