Update Required To play the media you will need to either update your browser to a recent version or update your Flash plugin.
By Alice Bryant
29 June 2021

His green, three-wheeled, motorized tuk tuk has been mostly unused for more than a year. In the past few months, though, he has earned about 600 baht, or $19 a month to put K-pop advertisements on his vehicle.

K-pop, or Korean popular music, is known throughout the world for its catchy sound and very loyal fans.

Thammasa said the extra money "may not be a lot for most people, but it is for us," as he looked at the shiny, colorful advertisement of Jung.

Drivers of Bangkok's tuk tuks have been hit hard by the pandemic's effects on Thailand's tourism industry. The drivers now sit on corners of empty city streets and talk of their financial worries.

Samran used to earn around 1,500 baht, or $47, a day driving foreign tourists around Bangkok. Nearly all of that disappeared as visitor numbers fell by 85 percent in 2020. Thailand is not expected to lift its border restrictions for months.

Unexpected help came this year from Thailand's K-pop-loving young adults. In the past, they had been buying public transport advertisements to celebrate stars' birthdays and record releases. Now, they are giving their ad money to small businesses, including tuk tuk operators and street food sellers.

Over the last few months, young fans have worked together to put up ads of their favorite K-pop stars on the vehicles. Each ad, or advertisement, runs for a month and provides much-needed support to struggling drivers.

Samran and many others now drive their empty tuk tuks around Bangkok with an ad of a different K-pop star every month. They stop for young Thai fans to take pictures and use their service. 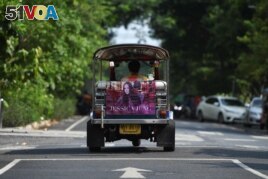 So far, the plan has helped several hundred tuk tuk drivers. There are more than 9,000 tuk tuks in Bangkok, government records say.

Buying the ads has roots in last year's anti-government protests. Those demonstrations brought tens of thousands of students demanding the resignation of Prime Minister Prayuth Chan-ocha. He first came to power in 2014 through a military takeover.

Among the protestors were many K-pop fans. Last year, they threatened to pull billboard advertising money from the city's Skytrain and underground trains after transport was closed down. The closings were an attempt by officials to prevent students from reaching protest areas.

The fans started spending their ad money differently -- printing signs and finding tuk tuk drivers at garages and on the street.

"It's a political expression that we don't support capitalists," said Pichaya Prachathomrong, who is 27 years old. "This marked a change from us competing to book skytrain and subway billboards. But now it's tuk tuks," she said.

The "Tuk Up" service was created by 21-year-old university student Thitipong Lohawech. At first, its purpose was to help drivers who rented vehicles from his family's garage. But now it supports about 300 drivers from all over Bangkok.

Drivers said they have seen little of the government's approved aid of around 967 billion baht, or $30 billion. The aid was mostly given out through mobile apps – making it useless for a lot of tuk tuk drivers.

"By the time the money reaches us, we're nearly dead," said Pairot Suktham, a 54-year-old driver. Like many others, he does not have a mobile phone.

"The fans are our life support system and give us hope to keep fighting," he said.

Tourist – n. a person who travels to a place for pleasure

Billboard – n. a large sign for advertisements that is next to a road, on the side of a building, etc.

Garage – n. a building or part of a building in which a car, truck, etc., is kept

Book – v. to make arrangements so that you will be able to use or have at a later time