Update Required To play the media you will need to either update your browser to a recent version or update your Flash plugin.
By Dan Novak
24 November 2021


The South Korean superstar music group BTS was named artist of the year at the American Music Awards on Sunday. It was the group's first time taking the top prize.

Taylor Swift, Drake and The Weeknd were also nominated for artist of the year. 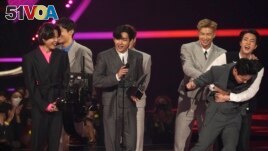 BTS accepts the award for artist of the year at the American Music Awards on Sunday, Nov. 21, 2021 at Microsoft Theater in Los Angeles. (AP Photo/Chris Pizzello)

BTS member RM said Sunday after receiving the award, "Seven boys from Korea, united by love for music, met the love and support from all the armies all over the world."

The biggest BTS fans are called the group's "army."

"This whole thing is a miracle," RM added. "Seriously, we would never take this for granted."

The group performed their number one single "My Universe" with the rock group Coldplay. They ended the show with a performance of "Butter," which also went number one.

The Associated Press reported this story. Dan Novak adapted it for VOA Learning English with additional reporting from Forbes. Ashley Thompson was the editor.

chart — n. a list that shows which music recordings have sold the most during a recent period of time

take for granted — v. to fail to properly notice or appreciate

duo — n. two people who perform together, are usually seen together, or are associated with each other

streaming — adj. playing continuously as data is sent to a computer over the Internet