Update Required To play the media you will need to either update your browser to a recent version or update your Flash plugin.
By Hai Do
16 August 2021


Thousands of Afghans sought to flee the capital Kabul on Monday, a day after Taliban fighters seized the city.

Hundreds of people ran alongside an American military transport plane as it tried to take off at Kabul's international airport. Some climbed onto the sides of the aircraft in hopes of finding a way out of the mountainous, land-locked country.

Videos on social media also showed hundreds of people running across the runway. U.S. soldiers fired warning shots into the air as they sought to keep the area secure. Another video showed a crowd pushing and forcing its way up a set of stairs, trying to board another plane. Some of the people were seen hanging onto the plane just before takeoff.

Shafi Arifi, a 24-year-old man who had a ticket to travel to Uzbekistan on Sunday, was unable to board his plane. It was filled with people who had raced across the runway and climbed aboard.

"There was no room for us to stand," Arifi told The Associated Press. "Children were crying, women were shouting, young and old men were so angry and upset, no one could hear each other. There was no oxygen to breathe."

American military officials told the AP the situation at the airport had left seven dead, including several people who fell from the plane. Pentagon spokesman John Kirby said U.S. forces killed two people he described as carrying weapons. He said 1,000 more U.S. troops would be deployed to secure the airfield and back up the 2,500 already there. All flights at the airport were halted until people could be cleared from the runway, Kirby added.

The airport chaos came a day after Taliban militants entered Kabul on Sunday without firing a shot. The Taliban's arrival led Afghan President Ashraf Ghani to fly out of the country with his vice president and other senior officials. 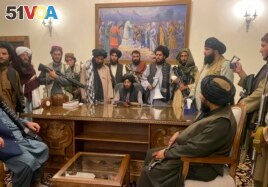 A group of Taliban fighters took control of the presidential grounds at night after a 9-day offensive that faced little resistance across Afghanistan. The speed of the Taliban offensive has shocked both locals and the international community.

Mullah Abdul Ghani Baradar is a Taliban leader involved in peace talks with the U.S. and the Afghan government. He spoke in a video message to Afghans from his office in Doha, Qatar. "I am here to announce that we are responsible for your lives and all that pertain to everyday living," Baradar said.

He added, "we will provide everything to make your lives better to the strength that has been provided to us by the Almighty who has granted us such a big victory."

Biden and the international community speak

Speaking from the White House on Monday, U.S. President Joe Biden said, "The scenes that we're seeing in Afghanistan, they're gut-wrenching." He added, "For those who have lost loved ones in Afghanistan, and for Americans who have fought and served in the country, serve our country in Afghanistan. This is deeply, deeply personal. It is for me as well."

Biden defended his decision to withdraw American troops from the 20-year conflict. He said, "American troops cannot and should not be fighting in a war and dying in a war that Afghan forces are not willing to fight for themselves."

United Nations Secretary-General Antonio Guterres said Monday the world was following events in Afghanistan "with a heavy heart and deep disquiet about what lies ahead." He told an emergency meeting of the Security Council: "We cannot and must not abandon the people of Afghanistan. At this grave hour, I urge all parties, especially the Taliban, to exercise utmost restraint to protect lives and to ensure that humanitarian needs can be met." Guterres added, "I am particularly concerned by accounts of mounting human rights violations against the women and girls of Afghanistan, who fear a return to the darkest days."

How did the Taliban come to power?

The Taliban was formed in the 1990s to fight against the Soviet occupation of Afghanistan. After the Soviet withdrawal, the group won a two-year civil war and ran the country from 1996 to 2001 under severe Islamic law.

In 2001, a U.S.-led invasion ousted the group for providing refuge to Osama bin Laden and al-Qaida - the extremist group that attacked and killed 3,000 Americans in the terrorist event known as September 11. The Taliban then re-grouped across the border in Pakistan to fight against the U.S.-backed government in Kabul.

On April 14, President Biden announced that U.S. troops would be fully withdrawn by Sept. 11, 2021. U.S. forces, however, left Bagram airfield at the end of June, effectively ending U.S. military involvement in the country. Bagram Airfield had remained the center of American military power in the country during the 20-year war.

After the U.S. withdrawal from Bagram, the Taliban stepped up its offensive against the Afghan government. It captured the first of many provincial capitals on August 6. Less than 10 days later, Kabul fell, the government collapsed and the U.S. and Western nations worked to evacuate its embassies, employees and allies.

The scene in Kabul

On Monday, the Taliban deployed fighters on the streets of Kabul with most people hiding in their homes. The Associated Press reported there was less traffic than usual as armed men knocked on doors and searched vehicles at one of the city's main centers.

Nillan, a 27-year-old resident of Kabul, said she did not see a single woman out on the streets during a 15-minute drive. She said she saw "only men and boys."

"It feels like time has stopped. Everything's changed," she told the AP. Nillan added that Afghan women now have to worry about simple things like how to get food without a man by their side.

"We don't know what to do, we don't know if we still have jobs," she said. "It feels like our life and our future has ended."

The Associated Press, Reuters and VOA News reported on this story. Hai Do adapted the reports for Learning English. Bryan Lynn was the editor.

upset – adj. unhappy or worried about something

chaos – n. a situation in which there is not order

pertain – v. to relate to something

grant – v. to give or permit something

abandon – v. to leave someone or something in a place

evacuate – v. to remove a person or groups of people from a dangerous place