Update Required To play the media you will need to either update your browser to a recent version or update your Flash plugin.
By Dan Novak
25 August 2021


Mohammad Daoud Sultanzoy is the mayor of Kabul, the capital of Afghanistan. The Taliban has taken control of the city but has kept him in office.

The mayor has some words of advice for the militant group. Sultanzoy spoke with VOA's Afghanistan Branch on Monday. He said if the Taliban does not listen to the people's interests and dreams "they, too, will be seen" as a group that advanced religious, ethnic and regional interests. "And their reputation will be damaged."

Sultanzoy is a well-known politician with no connections to the Taliban. He was among a few senior officials who were permitted to keep their jobs after the Taliban took power in Kabul on August 15. Most other leaders resigned or fled the country. 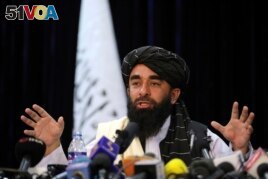 Sultanzoy said the Taliban called him the day after entering Kabul, home to about 5 million people. The Taliban asked him to continue to do his job.

"So I went to work," he said. "Until I'm told otherwise, I'll continue to work. This is my country. I don't work for any individual or group. I serve my city's residents. I'm from Kabul, and I'll live in Kabul."

Sultanzoy is a pilot by training. He served in the Afghan parliament from 2005 to 2010 and ran for president in 2014. He lost the 2014 election to Ashraf Ghani, who later named Sultanzoy a top adviser. Ghani later put him in charge of the capital in March 2020.

Like many other former Ghani allies, Sultanzoy criticized the former president for fleeing the country. Ghani did not tell members of his own government.

In an August 18 video message from the United Arab Emirates, where he is now living, Ghani defended his decision. He said he was "forced to leave" Afghanistan to avoid more violence.

Much of the world's attention is on the evacuation of thousands of Americans and Afghans from Kabul. Afghanistan still lacks a new national government. But city officials have continued to provide basic services, Sultanzoy said.

He said efforts had already started to remove barriers on streets and sidewalks. "Once security is restored, all these barriers should be removed," he added.

Taliban spokesman Zabihullah Mujahid spoke to reporters in Kabul on Tuesday. He said the city has also restarted collecting waste.

But there are problems. With the lack of security, some city residents have started building illegal housing at night, Sultanzoy said.

The Taliban has not yet formed a new government. But they have started hiring new police officers after thousands resigned their jobs after the militants captured the city, Sultanzoy said. And Mujahid said the former head of Kabul's traffic police has been renamed to his position.

Shaista Lami reported this story for Voice of America. Dan Novak adapted it for VOA Learning English. Mario Ritter, Jr. was the editor.

advance — v. to help the progress of something

regional — adj. having to do with a part or area of a country

reputation — n. the common opinion that people have about someone

restore — v. to bring something back to an earlier state

evacuation — n. an effort to remove people from a dangerous place or situation

function — v. to work; to operate