Update Required To play the media you will need to either update your browser to a recent version or update your Flash plugin.
By Dan Friedell
23 September, 2017


Russia has unveiled a monument to Mikhail Kalashnikov, creator of one of the most famous firearms in the world.

Mikhail Kalashnikov was born in a rural area of Russia in 1919. As a boy, Mikhail was interested in making farm equipment. He was born into a farming family, after all.

But, later he became a soldier and was injured in World War Two.

Kalashnikov and some other soldiers decided that the Russian army needed better rifles than those used by the Germans.

So Kalashnikov started designing his own. 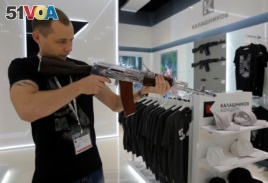 The weapon gained popularity because it worked equally well in hot, wet jungles and cold, dry mountains. It was also easy to operate and take care of. Some users can take an AK-47 apart in just 30 seconds.

Russia sent the guns to its allies and sold the design to other countries so they could produce their own versions. Some experts think 70 million Kalashnikov rifles have been made. They say the AK-47 and its more modern versions represent 20 percent of the world's firearms.

Both Russian President Vladimir Putin and his minister of culture see the AK-47 as important to the identity of Russia.

Putin said: "The Kalashnikov rifle is a symbol of the creative genius of our people."

While Russian leaders celebrated Kalashnikov's memory with the statue, some activists demonstrated at the event.

The protesters said a person who created an instrument of death should not be considered a hero. Radio Free Europe/Radio Liberty reported one protester calling the statue "loathsome" and "trash."

For many years, Kalashnikov stood up for his weapon as a way to defend Russia. He blamed politicians for failing to find peaceful solutions to disputes. "I sleep well," he once said.

But, a few months before his death in 2013, Kalashnikov expressed second thoughts.

He wrote a letter to the leader of the Russian Orthodox Church. In the letter, he asked whether, as the creator of a weapon, he was responsible for the deaths that came from its use.

He called his worry "unbearable."

The church leader said the deaths were not Kalashnikov's fault, but the fault of those who used the rifle with "evil intentions."

Dan Friedell adapted this story for Learning English based on a reports by VOANews, Reuters and Radio Free Europe. Caty Weaver was the editor.

Do you think Kalashnikov should be considered a hero? We want to know. Write to us in the Comments Section or on 51VOA.COM.

rifle– n. a gun that has a long barrel and that is held against your shoulder when you shoot it

automatic– adj. shooting many bullets very quickly when the trigger is pulled

trash– n. things that are no longer useful or wanted and that have been thrown away

unbearable– adj. too bad, harsh, or extreme to be accepted or endured : not bearable

intention– n. the thing that you plan to do or achieve : an aim or purpose