Kelly, Kornienko Land on Earth after Year in Space

Update Required To play the media you will need to either update your browser to a recent version or update your Flash plugin.
By Anne Ball
02 March, 2016


Scott Kelly and Mikhail Kornienko have their feet on the ground for the first time in 340 days.

Riding in a Russian spacecraft, they made it back to Kazakhstan, along with a fellow Russian cosmonaut.

Theirs was a record-setting journey. It is the longest time humans have spent living on the International Space Station (ISS). Now, Kelly also holds the record for the longest time an American has spent in space: 520 days in space, over four missions. 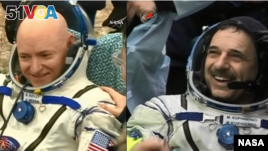 NASA astronaut and Expedition 46 Commander Scott Kelly and his Russian counterpart Mikhail Kornienko enjoy the cold fresh air back on Earth after their historic 340-day mission aboard the International Space Station.

After being taken out of the capsule, they were put in special chairs while they start getting used to Earth's gravity again. They were to be examined and tested before Kelly is flown home to the United States.

After undergoing more tests and exams at NASA's Houston, Texas offices, Kelly said he wants to go home and jump into his swimming pool.

We will find out more about his journey when he talks to the media on this coming Friday.

In his last press conference from space, Kelly talked about the difficulties of living on the ISS for a year. He called it "a harsh environment," with only a small personal space.

"You know, I've spent in the CQ I'm looking at, the crew's quarters here, probably almost half the time I've been here between sleeping and working on the computer, I've spent in a basically a box, the size of a phone booth."

He said he feels "pretty good physically." But the toughest part was being away from loved ones.

"The hardest part is being isolated, you know, in a physical sense from people on the ground that are important to you."

What they learn will be part of NASA's Journey to Mars program. It will take astronauts at least 500 days — round trip -- to travel to Mars, and back home. During that time they will need to grow their own food and live in small spaces with others for many months.

Kelly and Kornienko monitored their bodies to see what space does to humans. There are concerns about the effects of long space flights. These include damage from radiation and loss of bone and muscle mass due to lack of gravity. Also, over time in space flight, the fluid in a person's body moves up toward the head, sometimes causing eye problems.

Scott Kelly is also part of a twin study. His brother Mark Kelly is an identical twin and a former astronaut. During the past year, NASA has been testing both the men. They will study the brothers to see how space changes a body.

NASA will use these lessons learned to help the newest astronauts now being hired for the Mars journey. The space agency hopes to send humans to Mars in the 2030s.

It is a mission Scott Kelly believes is possible. "If we can dream it," he said from space, "we can do it if we really want to."

We want to hear from you. Write to us in the Comments Section and join us on 51voa.com.

isolate – v. to put or keep in a place that is separate from others

endure – v. to experience something for a long time, sometimes painful

monitor – v. to watch for activity or behavior