Lincoln Struggles to Keep Kentucky, Missouri in the Union

Update Required To play the media you will need to either update your browser to a recent version or update your Flash plugin.
By Frank Beardsley and Kelly Jean Kellly
25 September, 2014

This is The Making of a Nation, with VOA Learning English. I'm Kelly Jean Kelly.

By the end of May 1861, 11 slave-holding, Southern states had withdrawn from the United States. They formed their own independent nation. They called it the Confederate States of America. 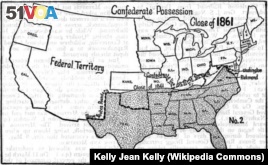 This map, from a 1920 Encyclopedia, shows the Union and Confederate states at the end of 1861.

Two other slave-holding states -- Kentucky and Missouri -- chose to stay in the Union. But no one knew how long they would remain.

Amy Murrell Taylor is a historian. She has a special interest in Kentucky. She says the North and the South each knew Kentucky was important.

"It was a source of manpower for either side. It was also obviously the geographic middle ground in this war. And as such, it contained some really important transportation routes that both armies wanted."

President Abraham Lincoln feared that if Kentucky seceded, Missouri and Maryland might withdraw from the Union, too. The Confederacy would then become too powerful to fight, he thought.

President Lincoln wanted Kentucky firmly on the side of the Union. But he decided not to put Kentucky under military rule, as he had done in Maryland. Historian Amy Murrell Taylor says Lincoln wanted to treat the situation "delicately."

"It's about maintaining that support of Kentuckians."

In the end, Kentucky stayed in the Union. But Amy Murrell Taylor says Kentuckians expected Lincoln to keep his promise about slavery. Lincoln had said that he did not want to interfere with slavery where it already existed.

Missouri was another slave state in question. Its governor tried hard to take Missouri out of the Union. He called a convention to decide the question. But a majority of the delegates refused to vote for secession.

Missouri, too, would remain in the Union. Missouri and Kentucky -- along with Delaware, Maryland, and eventually West Virginia – were called border states. They all stayed in the Union. But many people in these areas supported the Confederacy. Historian Amy Murrell Taylor says the border states seemed to fight their own civil war.

"We have towns that divide, cities that divide, communities, families that divide from one another." Some of the worst guerrilla violence of the war happened in the border states. As she observed, they were "fought over, fought through, and fought in."

manpower – n. number of people who are available to work

seceded – v. separated from a nation and became independent