Update Required To play the media you will need to either update your browser to a recent version or update your Flash plugin.
By VOA
06 April, 2015


Kenyan warplanes attacked al-Shabab targets in southern Somalia on Sunday. The attacks were in answer to the killings of 148 people by al-Shabab terrorists at a college in Kenya days earlier.

Two training areas in the Gedo area of Somalia were hit. There have been no reports about damage or injuries in the camps.

A three-day-long period of mourning for those killed in the attack on the college began Sunday. 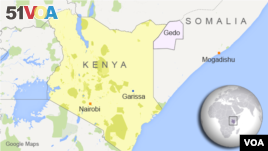 Kenyan forces struck areas in Gedo, Somalia, where al-Shabab is believed to have camps.

President Barack Obama says the agreement to limit Iran's nuclear program is the best way to keep the country from building a nuclear weapon. The agreement reached last week would end economic restrictions -- or sanctions -- that Western powers placed on Iran. In return, Iran would stop what the U.S. and others believe are efforts to build a nuclear weapon.

He told the New York Times that keeping the sanctions in place would keep the world from knowing about Iran's nuclear program. And he said attacks on Iran's nuclear sites would almost certainly cause the country to work hard to make a nuclear bomb.

He spoke Monday at the beginning of discussions in Parliament on whether to join the coalition led by Saudi Arabia to fight the Houthi rebels. Efforts to stop the rebels began two weeks ago with airstrikes in support of President Abd-Rabbu Mansour Hadi. He fled Yemen last month and is now in Saudi Arabia.

Pakistan has promised to support the fight against the rebels but has not said exactly what kind of support it would give.

A Houthi leader said Sunday that the rebels are willing to talk about stopping their attacks if the airstrikes are ended.

Critics say the laws restart disputed security laws that were cancelled in 2012. They warn the new laws would severely limit civil rights.

Malaysian officials have arrested many people since the beginning of last year on charges of supporting the Islamic State militant group.

And, Italian navy and coast guard ships rescued about 1,500 migrants from ships on Saturday and Sunday. Three ships in the Mediterranean Sea near the coast of Libya had called for help. As the Italian ships answered those calls, they found two other boats filled with migrants.

The migrants were taken to the islands of Sicily or Lampedusa.

Italian officials say the number of migrants trying to make the dangerous crossing is much higher in the first three months of this year than during the same time last year.

Most of the migrants are from North Africa, sub-Saharan Africa, and the Middle East. They are trying to escape war, poverty and terrorism.

sanctions – n. an action that is taken or an order that is given to force a country to obey international laws by limiting or stopping trade with that country or by not allowing economic aid for that country (usually plural)

civil rights – n. the rights that every person should have regardless of her or his gender, race or religion

crossing – n. a voyage across water