Kenya's capital, Nairobi, is busy preparing for the president of the United States. President Barack Obama will arrive later this week. This is Mr. Obama's first visit to the country of his father's birth since he was elected in 2008. The Nairobi city government has been taking steps to "beautify" the capital area before his arrival.

The city of Nairobi has launched a "beautification" project. It is part of a major program to clean up the city's streets before President Obama's visit.

Mr. Obama is coming to Nairobi, in part, to attend the Global Entrepreneurship Summit on July 25. Workers are repairing roads, planting flowers and painting some streets. They are also installing security cameras across the busy capital. 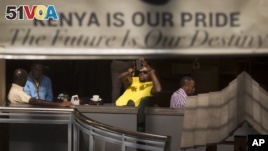 A man takes photographs of the mall with his smartphone while he sits in a cafe at the reopened Westgate Shopping Mall in Nairobi July 18, 2015. (AP Photo/Ben Curtis)

Leah Oyake-Ombis is the Chief Environment officer for the Nairobi City Council. She says the effort is about more than just welcoming one visitor.

"I think for Nairobi and especially as concerns the environmental services or rather activities, you are currently seeing us doing at the moment, we are not specifically or primarily doing them for the coming of the American president."

She says many of the improvement plans are not new. But the work was sped up because of the visit.

Still, the people of Nairobi do hope that the president will make some announcements that will benefit their city and the country.

She says Nairobi will be the starting point if the official announcements turn into real programs.

Nairobi is home to more than four million people. The city faces many difficult problems -- from congested roads to extreme poverty. Some issues are more than what a little paint can fix.

Most Kenyans know that Nairobi is chaotic, a little dirty and in need of a face-lift or major improvements. While Mr. Obama is unlikely to see large parts of the city, local residents say any improvement is a good thing.

James Onya'ncha is a Nairobi resident.

"They want to make it clean for the people who are coming to visit the country to see it more clean. But my wish is to let them continue the way they are doing at the moment, we need it to be clean and more beautiful he way it used to be before."

Jackie is a student.

"For now, they're doing fine because they're making the roads and everything, so I think it's an amazing job that they're doing."

Not everyone is enthusiastic with this plan. Some people have said the money spent on the visit could be used for better use.

Simon Ng'anga is a retired army officer. He blames a Nairobi official for wasting a lot of money to welcome the U.S. President. He says people need the money to improve areas for working class people who live in poverty. The city administration, he adds, should give the money to these people so they can improve the quality of their lives.

While Mr. Obama's trip will likely be short, people in Kenya's capital hope the benefits will last long after he is gone.

VOA's Gabe Joselow reported on this story from Nairobi. Triwik Kurniasari adapted it for Learning English. The editor was George Grow.

beautification – n. the act of making something more beautiful

install – v. to add or make something ready for use

benefit – v. to be useful or helpful

chaotic – adj. wild; a condition in which behavior and events are not controlled by anything