Update Required To play the media you will need to either update your browser to a recent version or update your Flash plugin.
By Bryan Lynn
16 December 2022


Officials in Kenya say severe drought conditions in a northern area have killed hundreds of wild animals in recent months. Many animals that do survive are starving and weak. They often come in contact with people while searching for food.

Kenya's Samburu county has experienced a lack of rain for the past four years. This has caused some of the severest dry conditions in 40 years. Experts say the effects of climate change have worsened the problem.

Officials say drought has killed at least 200 elephants, nearly 400 common zebras and more than 500 wildebeests over the past nine months. A number of other species have also been affected. 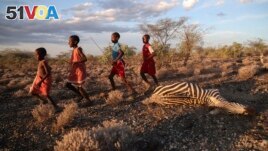 Maasai children run past a zebra that local residents said died due to drought, as they graze their cattle at Ilangeruani village, near Lake Magadi, in Kenya, on Nov. 9, 2022. (AP Photo/Brian Inganga, File)

Kenya's government has provided some emergency supplies such as water, grasses and mineral salts to help the animals. But many creatures are still found moving into areas where people live as they search for food and water.

David Lepeenoi is a 54-year-old who lives in Samburu. He told The Associated Press that elephants seem to be drawn to the trees he planted on his property. "The trees and water points are the main source of conflict between elephants and the community," he said.

"Where we have reported cases of wildlife dying, it is not actually within the parks," said Jim Nyamu. He helps run the Elephant Neighbors Center, a nonprofit group that seeks to protect elephants and their surroundings.

Nyamu said the fact that wildlife are not dying in parks suggests they were looking for food in established areas that have been blocked by human activities.

Records from the conservation group BirdLife Africa show that many birds are also dying in northern Kenya, most likely from starvation.

The group's Alex Ngari said the remains of migratory birds, such as the European Roller, can be seen across expanses of the very dry land. Over 300 bird species on the continent are already considered threatened or critically endangered.

The drought has also greatly harmed communities and has led to lost income, livestock deaths and failed crops. Farmers have started taking down dried trees to produce and sell charcoal to earn money.

This has added to environmental problems in the area, said Paul Gacheru, from the conservation group Nature Kenya. He told the AP an organized effort is needed to support local communities in efforts to reduce the effects of climate change. Gacheru said local people need to find less destructive ways to live with the warmer, drier climate.

In Samburu, conservation groups say they are doing what they can as natural resources dry up. At one elephant sanctuary, workers say about 30 of 40 young animals were rescued from the extreme dry conditions.

Along with the risk of starvation, drought can cause drops in immunity that can cause infections in the animals, said vet Isaiah Alolo. He works at the Reteti Elephant Sanctuary, which is part of the nearby Namunyak Wildlife Conservancy.

"In most cases, you find that the animal will die," Alolo said. This leads to many orphaned animals that need to be rescued. "That brings a lot of pressure" for those working to conserve species, he added.

Workers at the Reteti sanctuary bring food and other nutritional products from about 50 kilometers away near Mount Kenya, sanctuary caregiver Dorothy Lowakutuk said. That area is also at risk of more environmental damage if the drought continues.

"At least we ensure our elephants are recovering what they don't get in their natural habitat," Lowakutuk said.

livestock – n. farm animals (such as cows and sheep) used for grazing and roaming

sanctuary – n. a place where people or animals are given protection and shelter