Kenya’s Efforts to Protect Its Coral

Update Required To play the media you will need to either update your browser to a recent version or update your Flash plugin.
By Anna Matteo
28 June 2022


An environmental organization is restoring threatened coral reefs in the Indian Ocean off the coast of Africa.

Coral is a sea animal that builds hard, undersea structures that provide food and shelter for many forms of ocean life.

Diver Yatin Patel and his team are part of the REEFolution Foundation. The divers are working in the waters off Wasini Island off the coast of Kenya. 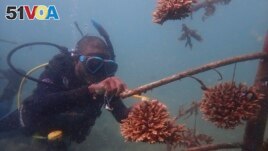 Their goal is to clean the coral nurseries and measure the size of the growing corals. The coral grows on structures made from materials such as plastic pipes and steel nets.

Patel told the Associated Press, "We use coral fragments collected from wild populations to establish the nurseries. After growing, they are taken to the coral garden."

The area is jointly supervised by the foundation and the island's community. Together they have planted over 8,000 corals each year since 2012. They have also placed about 800 human-made reef structures in the water to restore Wasini's coral gardens.

However, the project is threatened by growing costs and a planned fishing port in Shimoni, about three kilometers away on Kenya's coast.

The United Nation's Ocean Conference is taking place between June 27 and July 1 in Lisbon, Portugal. The gathering plans to make protection and restoration efforts for coral reefs one of its goals.

Small island states and coastal African nations will be trying to learn more about "blue financing" methods. This reportedly includes a plan to provide $625 billion aimed at protection and restoration of coral. The money will help aid communities that use oceans for their livelihoods. Earlier promises for aid reef restoration by the European Union and coral reef insurance will also be discussed.

The threat of decreasing fish populations caused by dying corals adds to the problems of east African countries. Millions of people in this area already face a food crisis because of a lack of rain in East Africa. The war in Ukraine has also affected food supplies in the area.

In early March, the Intergovernmental Panel on Climate Change issued a severe warning about the threats faced by African coastal and island nations. It said the coral reefs in the western Indian Ocean are in danger of a complete collapse.

The Wasini Island coral project is one of many across Africa's eastern coast. That area faces the problem of coral bleaching because of warming ocean waters. In 1998, for example, huge areas of the Indian Ocean's corals — from Somalia to South Africa — were badly affected.

What is coral bleaching?

Coral bleaching happens when extreme temperatures and the sun make corals release algae. This causes them to lose their color and turn white. Corals can survive bleaching events, but they put corals under great stress.

Tim McClanahan is an expert at the Wildlife Conservation Society, a non-governmental group based in New York City. He said in addition to the severe bleaching event of 1998, there was also one in 1983. In more recent years, there were also smaller events in 2005, 2010, and 2016.

Scientists have worried for many years about coral bleaching along the western Indian Ocean. Studies to better understand these events continue. Many, McClanahan said, are directly linked to climate change.

The Wasini coral restoration project is not the only one in the area. Nature Seychelles is a conservation non-governmental organization. It started the first coral replanting effort in the western Indian Ocean. That project is still ongoing. Tanzania now has a similar effort.

But Wasini's corals are in bad condition, said McClanahan.

"There are some areas in Tanzania, Mozambique, and Madagascar that are in better condition. We are working to protect those reefs," he said. He added that protection programs are much more successful than those that aim to restore badly bleached corals.

"We found it expensive and also over the long term many of the corals we planted died," he said of the Wildlife Conservation Society's coral restoration attempts. "The restoration efforts will not solve this big scale problem."

An environmental report seen by The Associated Press says that building the port will be harmful to corals, fish, and other marine life.

Wanjohi Kabukuru reported on this story in Kenya for the Associated Press. Anna Matteo adapted it for VOA Learning English.

restore –v. to bring back to or put back into a former or original state : restoration –n. the act or process of returning something to its original condition by repairing it or cleaning it

nursery –n. a place where plants or similar life is grown

fragment –n. a small piece taken from a larger object

garden –n. an area where plants are grown usually in a well-planned way

marine –adj. having to do with the sea or large bodies of water

stress –n. something that causes physical or emotional tension

scale –n. the level of something ("at a large scale" describes a big amount)