Update Required To play the media you will need to either update your browser to a recent version or update your Flash plugin.
By Gregory Stachel
13 July 2022


On Kenya's southern coast, an estimated 1,500 people depend on the sea to make a living. But local fishers are seeing less of one especially valuable fish, the tuna.

Local weather conditions usually mean there is a lot of tuna. The fish earns them a good amount of money at local markets.

Kenyan fisher Chapoka Miongo said there are several reasons that he and others are finding less tuna. One is the presence of large foreign fishing ships in the area. Another reason is changes to local weather conditions caused by climate change. 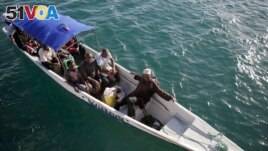 Fishermen head out to sea for their daily catch on June 10, 2022 at Shimoni Port in Kenya. (AP Photo/Brian Inganga)

Kassim Abdalla Zingizi is a fisher from the town of Vanga. Zingizi said most small fishing businesses lack the skills, knowledge, and financial support to compete with larger foreign fishing boats. The foreign boats are mostly from Europe and Asia. They use satellite technology to follow schools of tuna all over the Indian Ocean.

Another reason for the decrease in tuna is climate change.

Dennis Oigara is from the Kenya Fisheries Service. Oigara said the Kenyan government is putting an economic strategy into effect that will deal with the effects of climate change on the means of living for those on the coast. It will also increase the skills among artisanal fishers and further sustainable fishing methods.

Financial support for large fisheries has long been blamed for destructive fishing practices. The World Trade Organization has discussed the issue but there has been no resolution.

The Indian Ocean Tuna Commission is responsible for the area's tuna laws. In 2018 and 2020, the amount of tuna caught went over catch limits. The tuna commission was criticized for not enforcing measures to help protect several kinds of tuna from overfishing.

However, at its meeting earlier this year, the commission passed a resolution to study the effects of climate change on tuna fish stocks in the area. It was called one of the meeting's successes.

It is the second regional fisheries management organization to enforce a resolution on climate change.

The Intergovernmental Panel on Climate Change says differences in the climate have led to reduced amounts of sea life and damage to coral. It also said climatic differences have led to an increased risk of conflict over decreasing resources. Kenyan fishing communities are already feeling these effects.

Mazera Mgala started fishing in 1975. The experienced fisher said, "Back in the day I would start fishing in the early morning and three to four hours later I would be through as I had caught enough fish."

opportunity – n. a chance to do something

secretary – n. a person in a club or other organization who is in charge of keeping letters and records

coral – n. a hard material formed on the bottom of the sea by the skeletons of small creatures