Update Required To play the media you will need to either update your browser to a recent version or update your Flash plugin.
By VOA
24 September, 2015


Last week, we reported that Kenyan teachers went on strike. They want the government to honor a court decision that requires a 50- to 60-percent increase in teachers' pay.

Because of the strike, Kenyan students have been out of school since the beginning of the month. Yet many students still plan to take national exams in October. 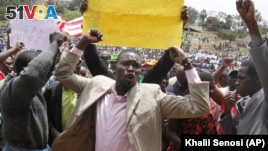 Supporters of Kenya's Opposition party Coalition for Reforms and Democracy (CORD), hold up placards ahead of a CORD rally at Uhuru Park, Nairobi, Kenya, Wednesday, Sept. 23, 2015, in solidarity with striking teachers

One is that "little to no" teaching has been taking place during the strike.

Another reason is that there is "tension among learners who are left idle." However, students must continue to prepare for national exams next month.

Teachers and students are waiting for the government and the Kenya National Union of Teachers to agree on wage issues.

Union Secretary General Wilson Sossion spoke to reporters on Monday. He said there were two times in the past when teachers did not get a pay increase. He noted that other public service workers got a 4 percent increase, but the teachers did not. Mr. Sossion said the court decision was meant to correct that "historical injustice."

"It is this historical injustice that the judgment of the employment and labor relations court sought to partly ameliorate."

In August, the Kenyan Supreme Court ordered a 50- to 60-percent pay increase for teachers. President Uhuru Kenyatta argued that teachers are paid well enough already. He said the government does not have the money available to pay the teachers even more.

The Institute for Economic Affairs in Nairobi reports that about 44 percent of teachers earn between 16,692 and 24,662 shillings a month. That is between $158 and $234 in monthly earnings.

The teachers are not earning any salary during the strike.

Mr. Sossion said the government should obey the court. He believes that the money should be available.

"Significantly, the president's statement made no mention of the billions (of shillings) lost through corruption and tax evasion."

The next appeals hearing on the question of teachers' salaries is set for September 29.

Wednesday, opposition politicians demonstrated in central Nairobi in support of the striking teachers. A coalition of opposition parties announced creation of a fund to raise money for the teachers. The group is collecting donations for the program.

The opposition Orange Democratic Movement has prepared a motion of impeachment against President Kenyatta. The group is gathering signatures in support of the motion. To be successful, a measure must have the support of two-thirds of the members of Parliament.

Jill Craig in Nairobi reported on this story for VOANews.com. Dr. Jill Robbins adapted her story for Learning English. The editor was George Grow.

Now it's your turn. What do you think about the government closing the schools? Should the government increase the teachers' pay? Write to us in the comment section.

injustice – n. a situation in which the rights of a person or a group of people are ignored

ameliorate – v. to make (something, such as a problem) better, less painful, etc.

evasion – n. the act of avoiding something that you do not want to do or deal with

fund – n. a plan or program

impeachment – n. a process in which an official is accused of unlawful activity